I had been under the understanding that Chicago Animal Care and Control Return to Owner actually meant “stray” return to owner.  Little did not I know it included other categories which CACC  considered return to owner.

This is my statement to the Commission members of Chicago Animal Care and Control on July 19th.

My name is Susan Taney, Director of Lost Dogs Illinois.  Lost Dogs Illinois is a not for profit organization that helps citizens find their lost dogs and Good Samaritans find lost dog’s owners but we also work with Animal Controls to increase their Return to Owner rate and decrease their stray intake.. We have typically defined Return to Owner as the percentage of stray or lost dogs who are brought in to CACC which are reunited with their owners.

I would first like to address the return to owner statistics. I’ll refer to it as RTO from here on in.  This year on CACC’s website I noticed that in the month of March the RTO statistics were split into categories:  strays that were reunited with their owner and other dogs that were returned to their owner for other reasons.  (to give you examples: dogs surrendered and the owner changed their mind or evictions or owner went to hospital so these were “return to owner” ). In all the discussions we had with CACC we assumed we were on the save wavelength and only referring to the strays that were reunited with their owners.  Also, I noticed that there was a whole new description about the live release rate and other definitions in regards to statistics.  With that in mind, the RTO statistics that I have reported to both CACC and the public have been wrong and are not as positive as I thought they were.  Never was there any indication with discussions with any of the  directors and staff that RTO included not only strays but the other categories I mentioned earlier, as well.

So I am going to now tell you the actual number of stray dogs reunited with their owners for three months in 2017 compared with what I wrote about on our website and Facebook page in which I gave praise to CACC for their stellar improvement.

I am very disappointed and disheartened about this discovery in regards  to the statistics.

Stray intake has been consistently been at 60%. Progressive animal controls are taking a hard look at stray intake on how to decrease it.  At the last commission meeting I attended, I made suggestions.

I don’t know who the new Director will be but I am truly hoping the new Director will try to fix the broken animal control system in Chicago with being a leader in the field which will expand to Cook County.Obviously the Live Release Rate has increased but the actual animal control system needs to be addressed, supported by the mayor and public and brought into the 21stcentury.

Thank you for your time.

Below listed are the actual statistic posted on the CACC’s website. 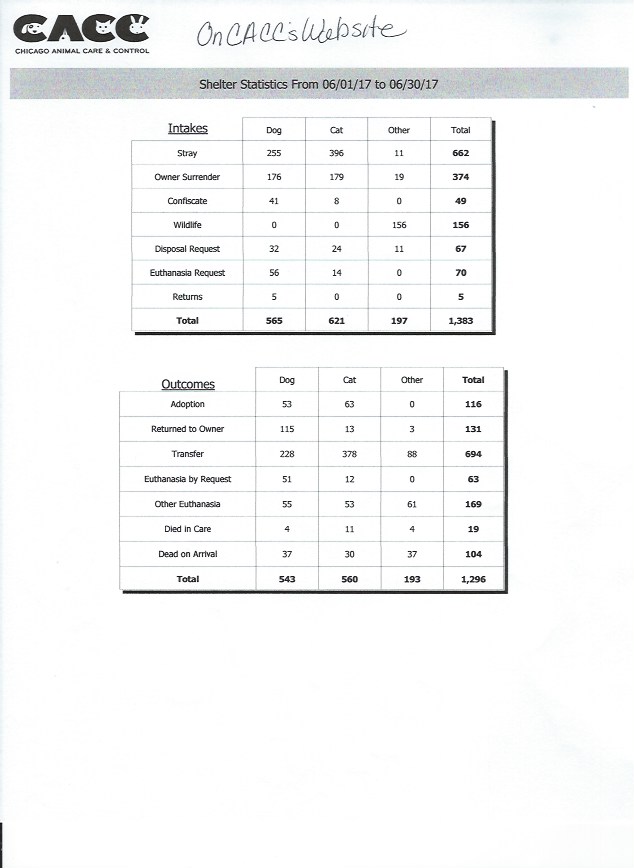 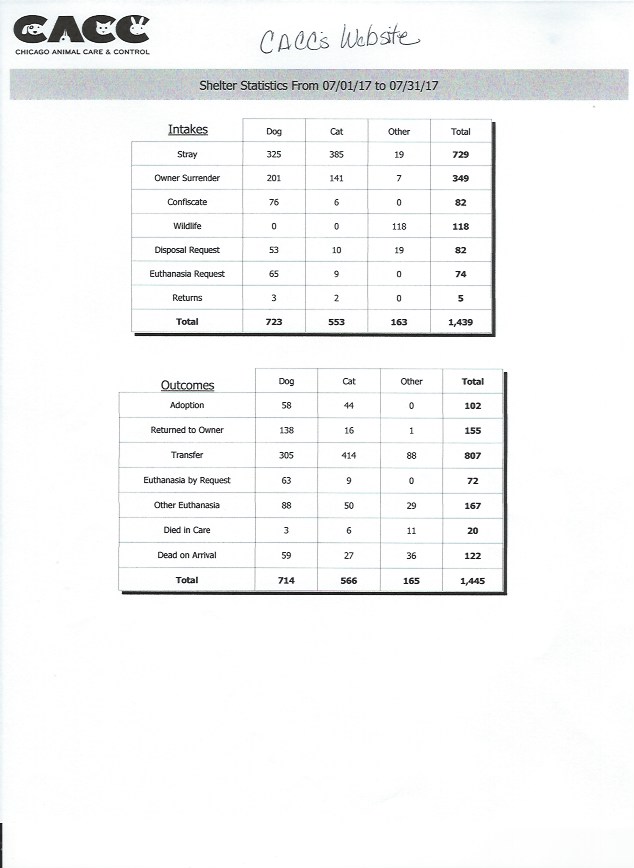 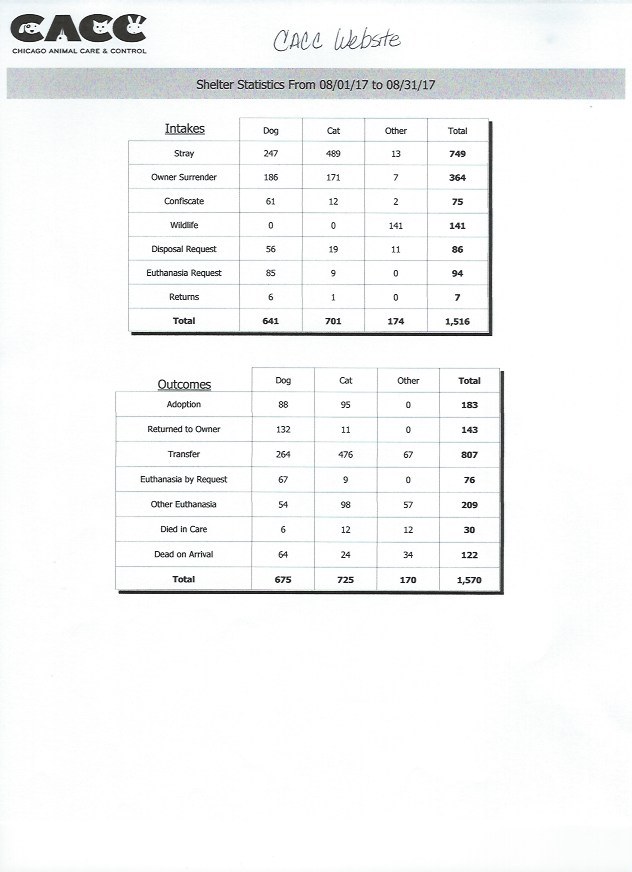 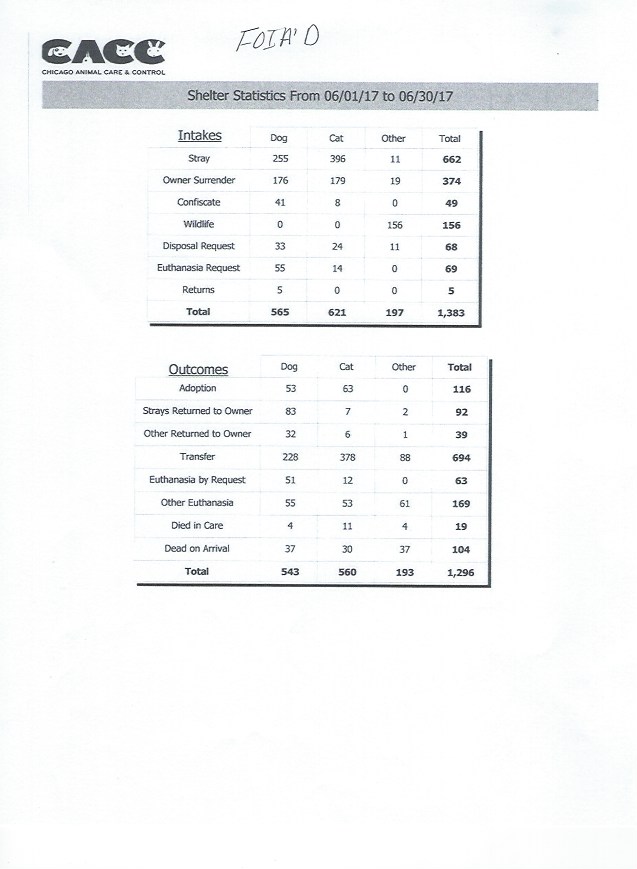 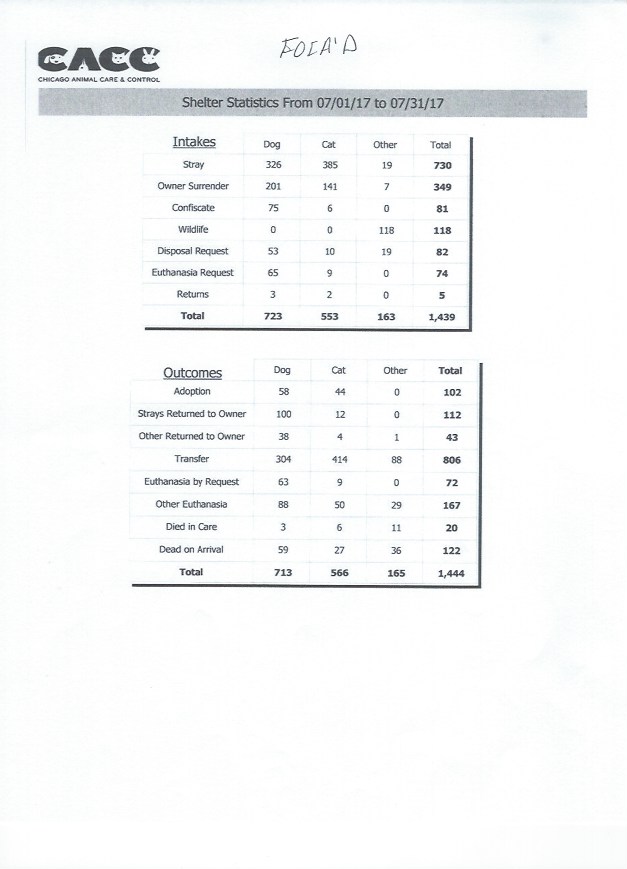 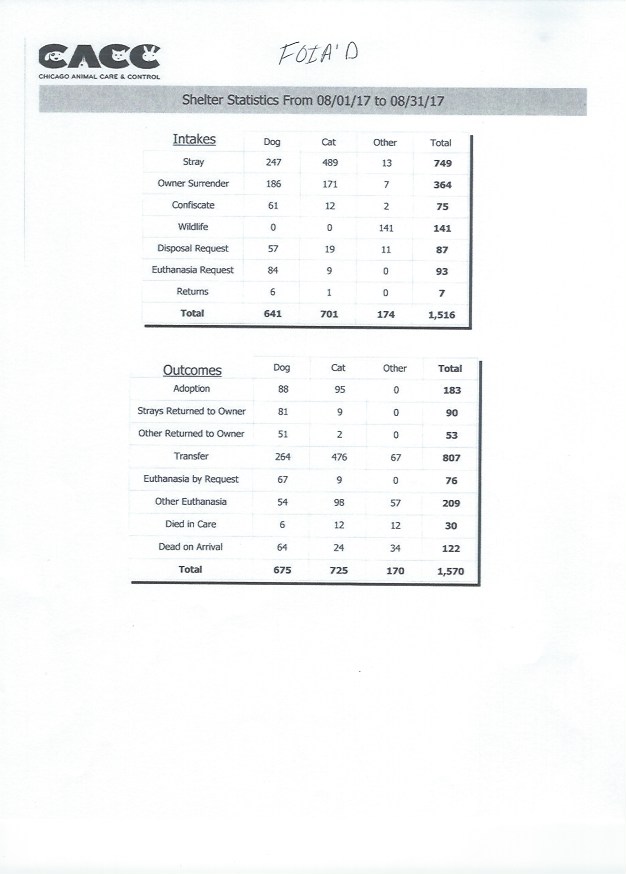 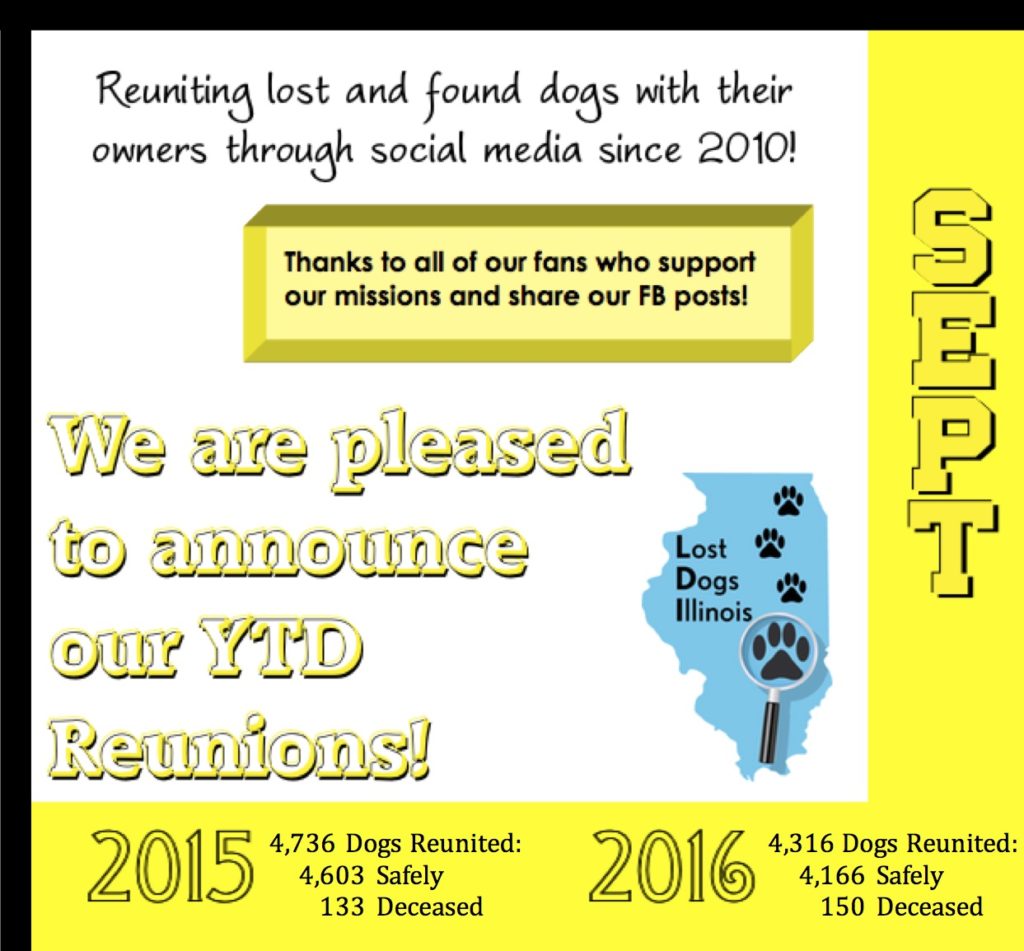 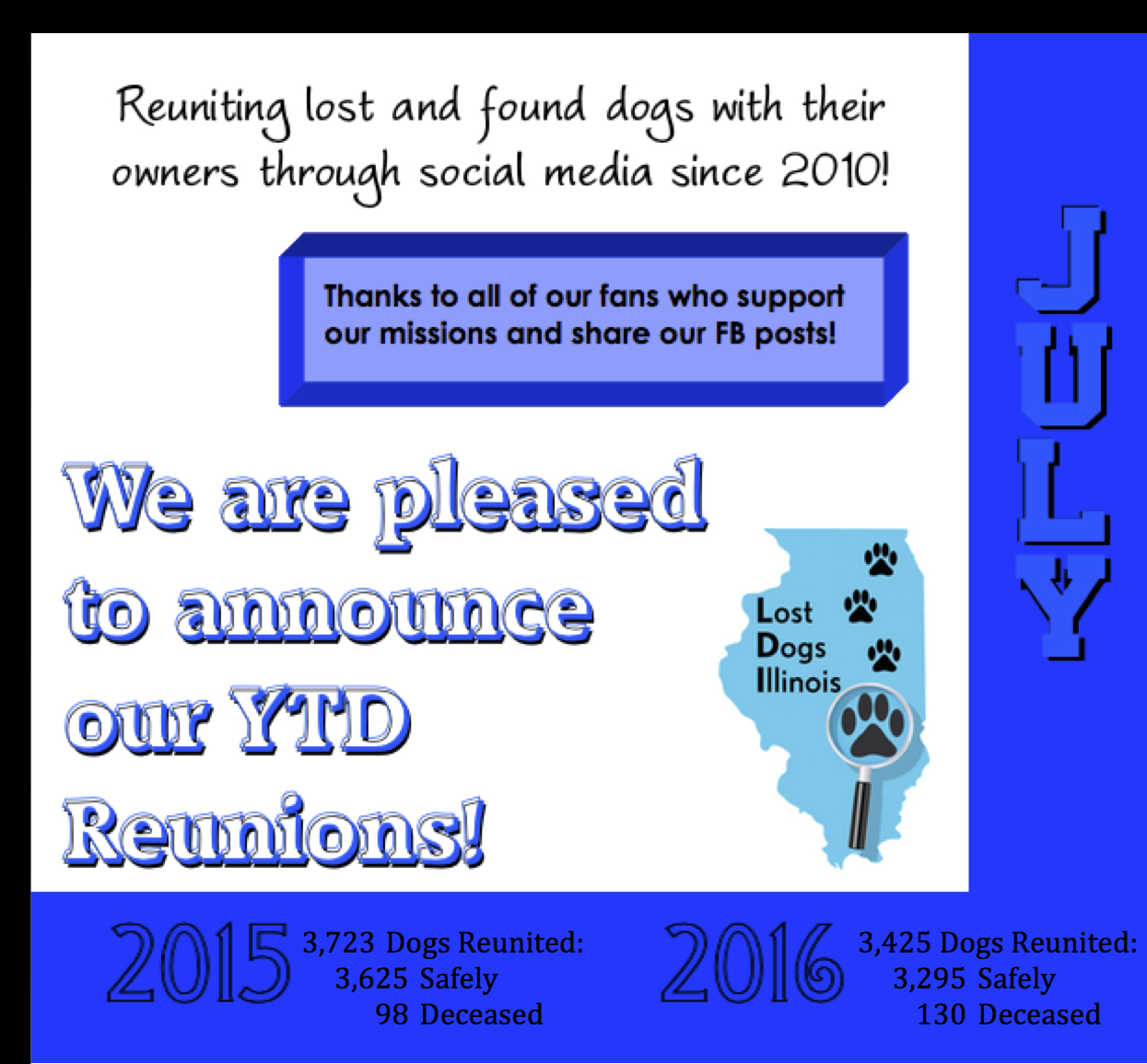 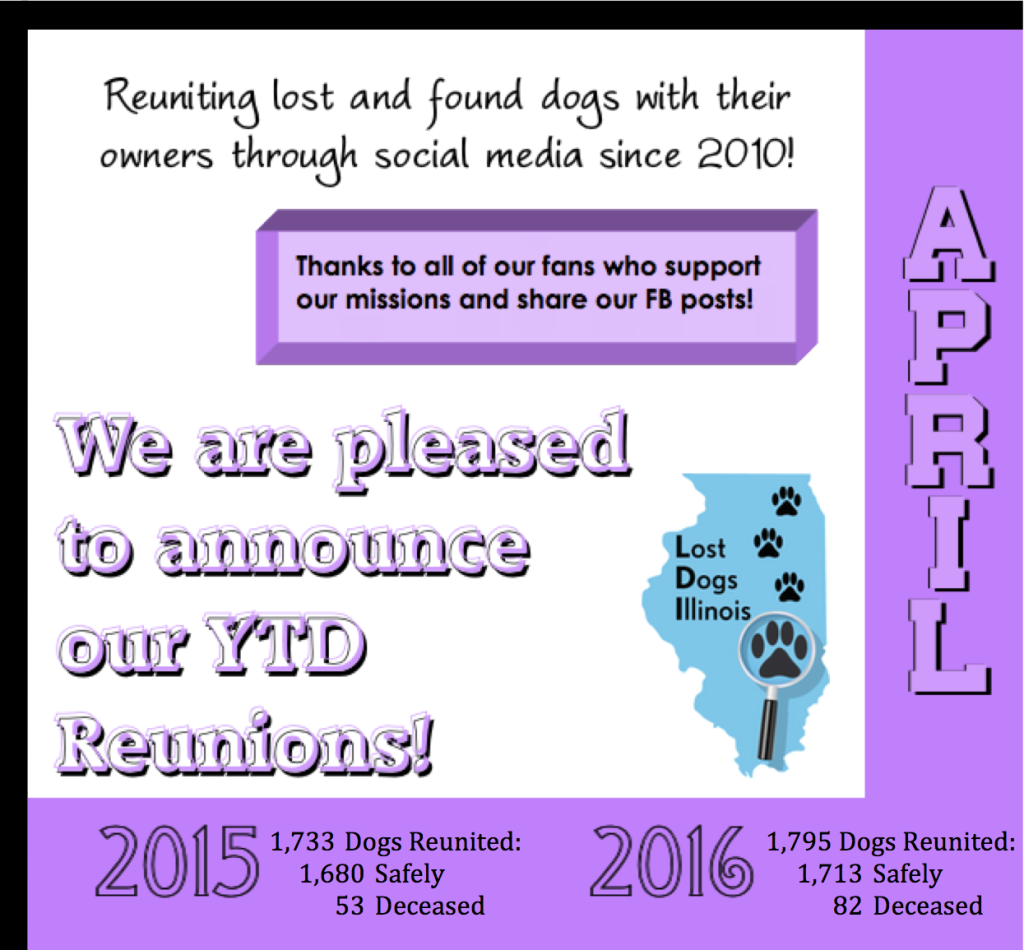 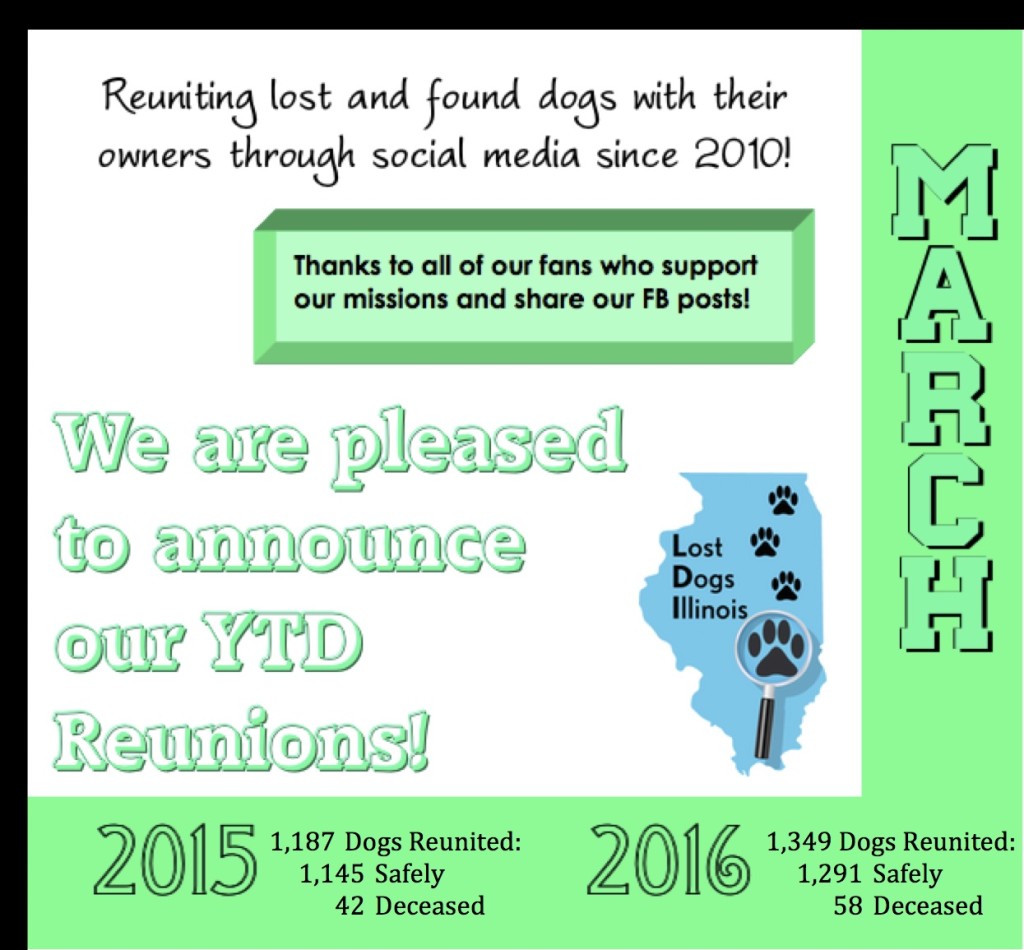 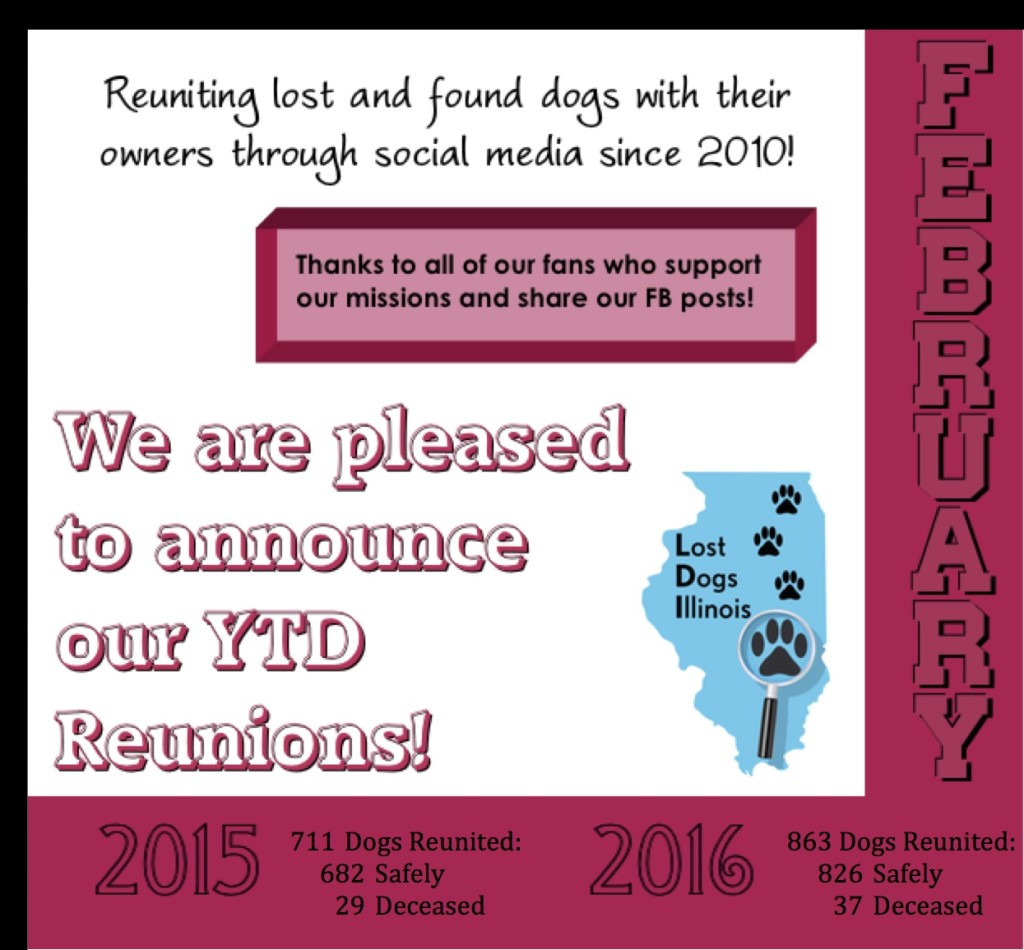 We are thrilled that we helped reunite over 30,000 dogs in 2015. As you can see – the states where we have had organizations the longest, have the most reunions. As the other groups gain traction and become more well-known, there numbers will rise also. We are proud to protect the human-animal bond by keeping families together. Thank you for watching our pages and sharing our posts! 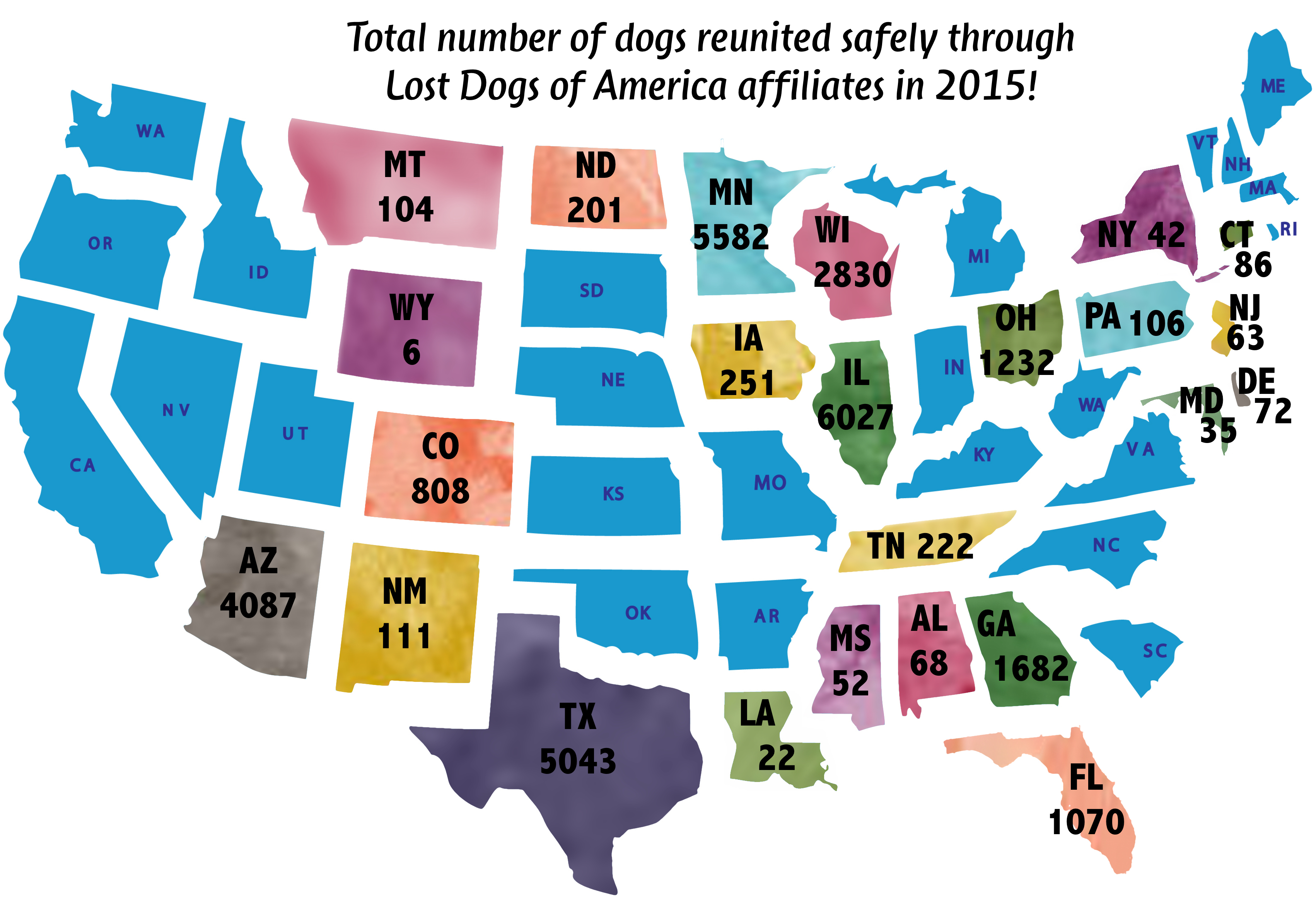 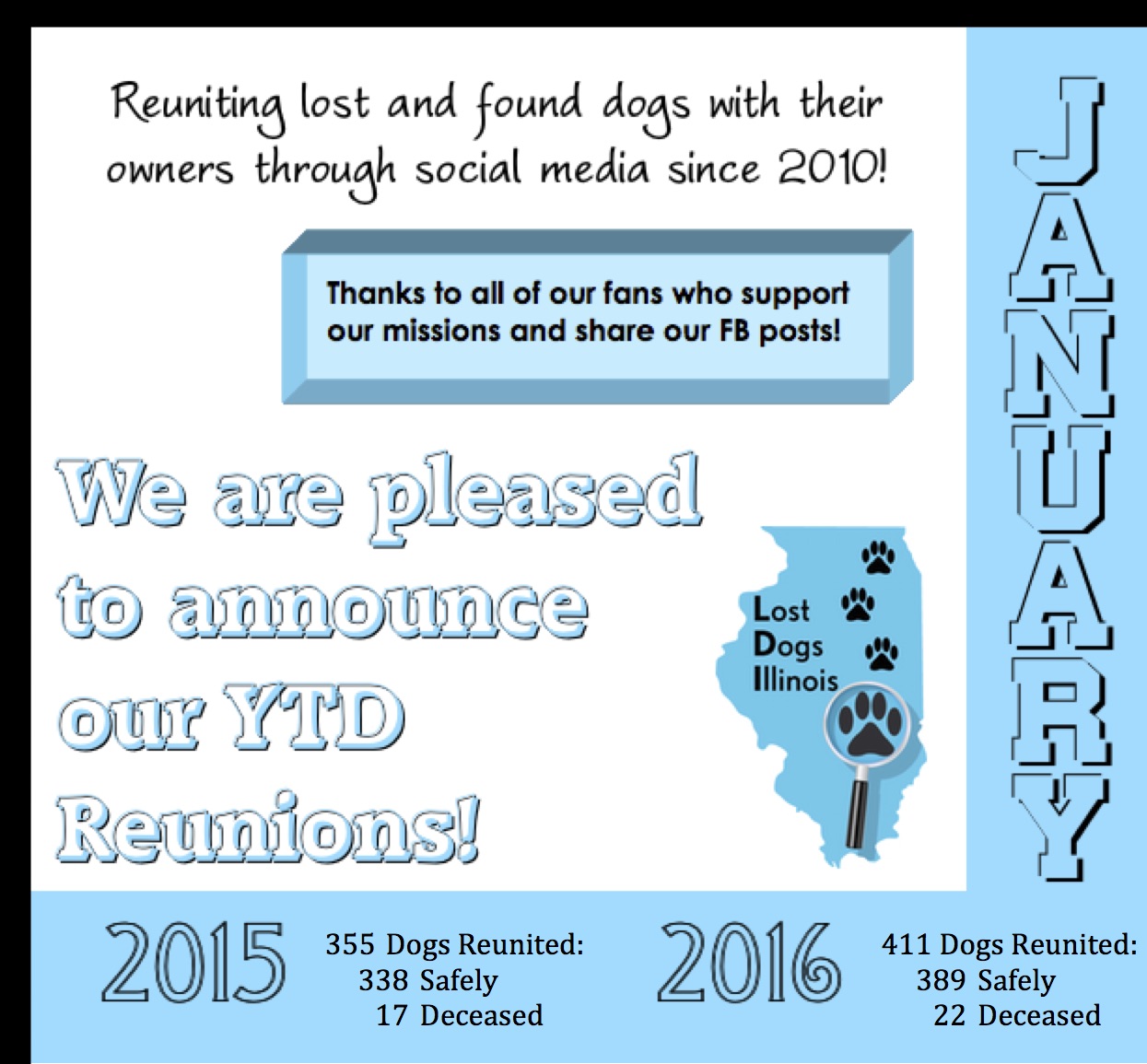 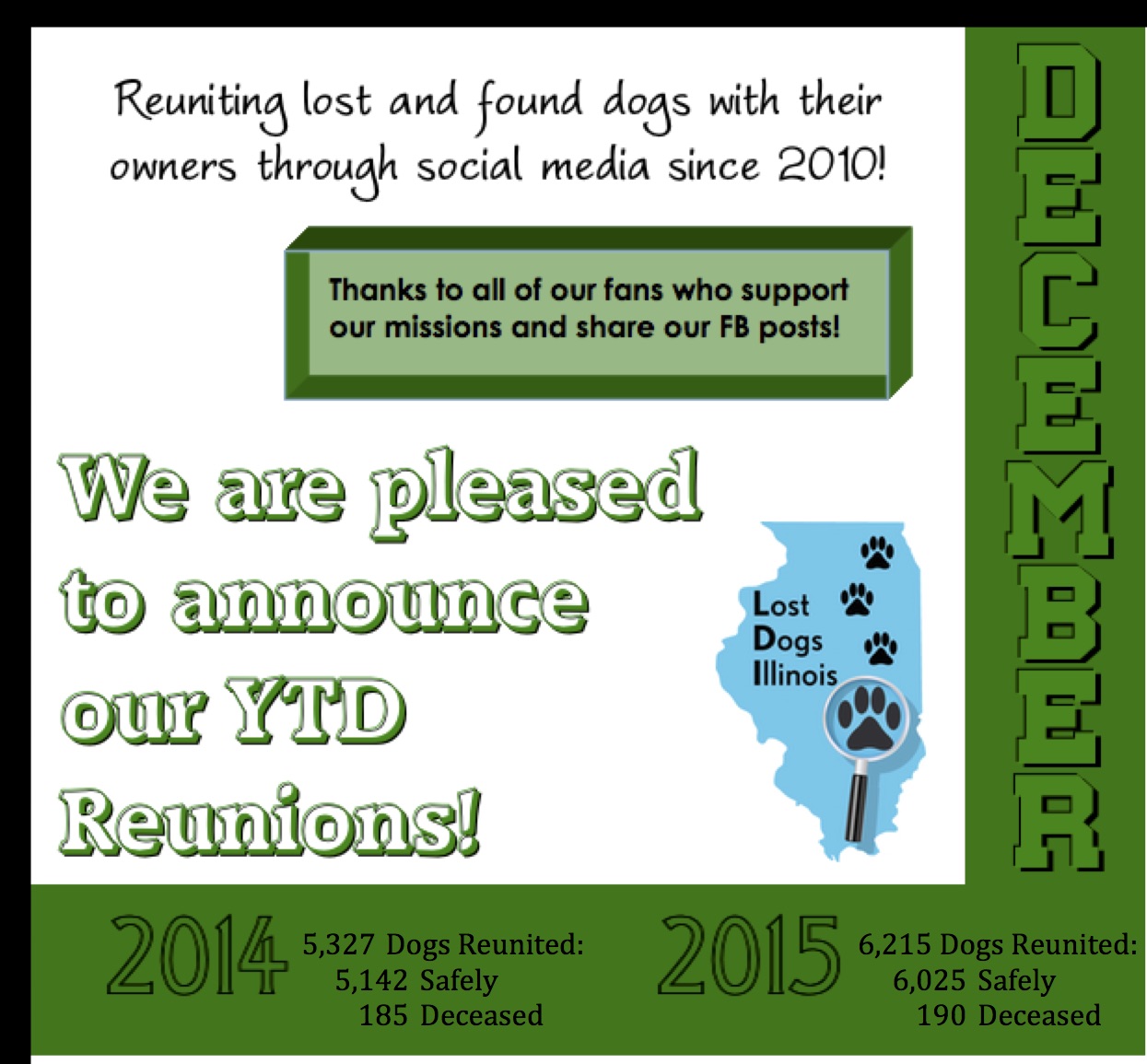 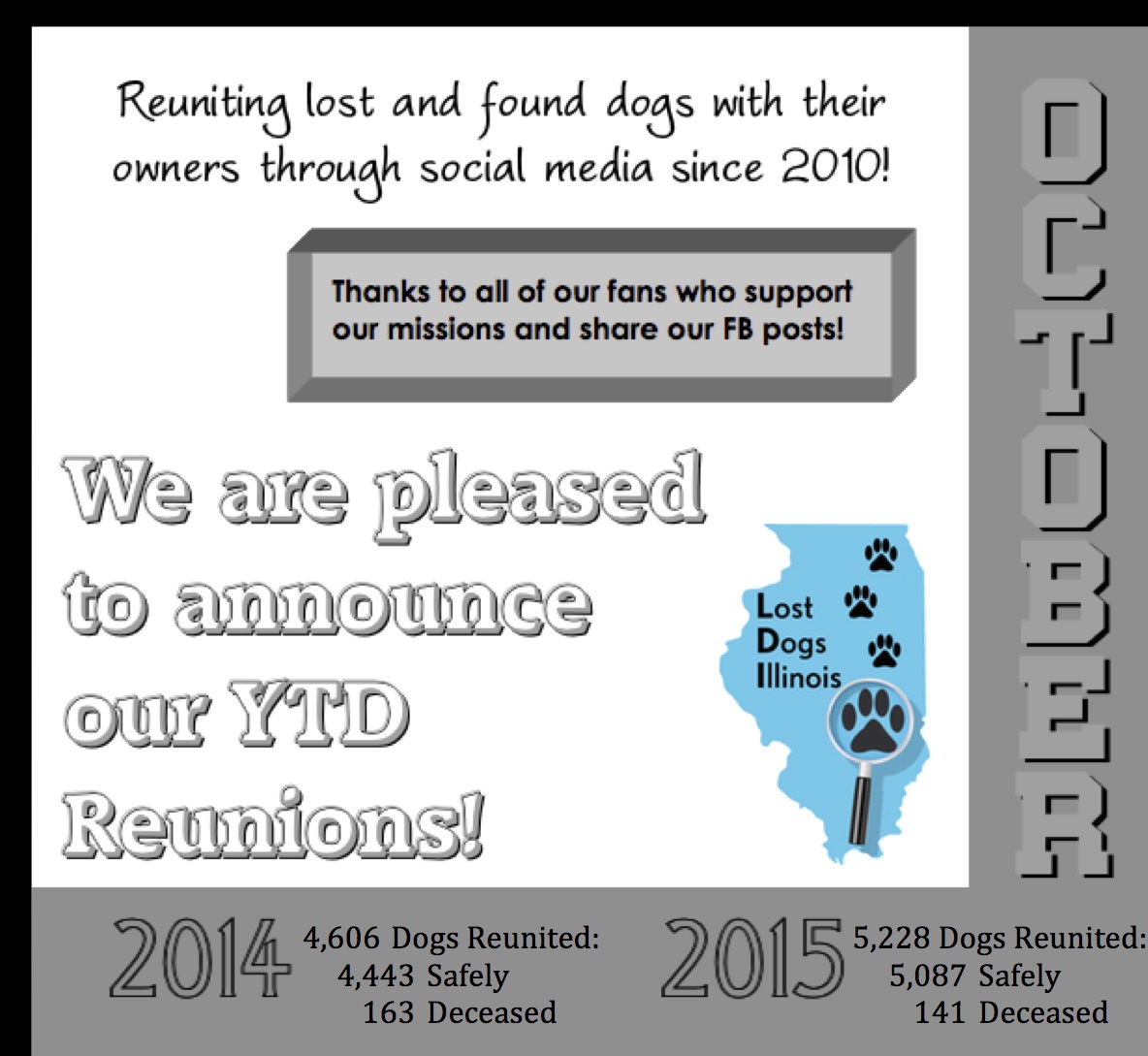