When Bill went missing from Countryside on July 30, 2017, his family posted on Lost Dogs Illinois right away. A LDI fan, Cindy, saw the post, shared it on Facebook, and then checked it again the next day. 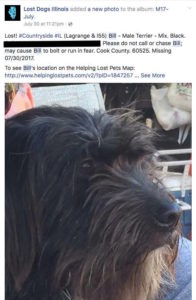 “I saw a friend of the family was asking for help,” Cindy said. “I figured I could go talk to them and give a little advice. But I had no idea how involved I was about to become in Bill’s journey.”

Cindy met Bill’s mom, Liz, at the forest preserve where Bill had become lost. They spent the next week putting up flyers in the residential area that was next to the preserve. Cindy gave Liz pointers on what dogs in survival mode may do and go.

“It was heartbreaking when Bill crossed our paths three times that week, but [to ensure we could bring him in] we needed to let him go so he would settle down and not leave the area,” Cindy said.

Cindy and Liz set out feeding stations and cameras where Bill ran into the woods and wherever someone reported seeing Bill. Their big break came August 6, when a neighbor reported that Bill passed through his parents’ backyard that day.

Working with Frank G., Cindy and Bill’s family were able to set up a feeding station/trap/camera on the neighbor’s property and kept it under surveillance. Cameras showed Bill coming to the feeding station daily for another week but wary of entering the trap to take the food. 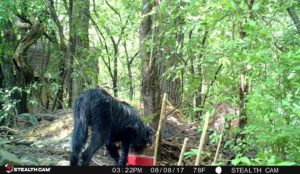 Not so the feral cats, skunk, opossum and 12 raccoons that Cindy and Frank wound up trapping and releasing instead. “Bill didn’t stand a chance of getting any food with all those critters going into the trap,” Cindy said. 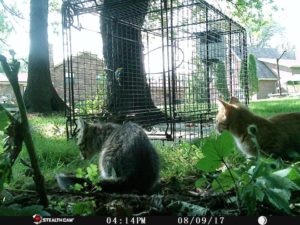 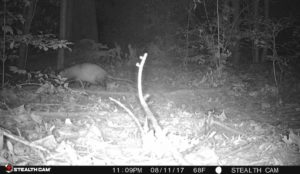 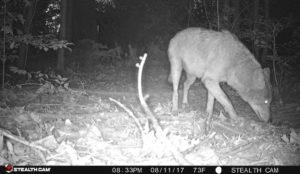 Because Bill seemed to visit the trap at random hours after dark, Cindy decided to do a stakeout one night after 11 pm. After trapping and releasing a couple smaller animals, Cindy dozed off only to wake at 3:22 am to the sound of a dog barking. It was Bill – 16 days after he had run off into the woods.

“It was pitch black so I couldn’t see a thing, not even the trap except for the glow-stick attached to its door,” Cindy said. “Bill barked on and off for a good 45 minutes. I was starting to wonder if he was warning other critters about the trap!”

Cindy placed more food inside the trap and waited two more hours in her car.

“Then I saw Bill cross the street,” Cindy said. “I hurried back to the trap, placed more food inside and got back in my car to wait for the sunrise. I figured the wildlife would be going to sleep then, and Bill would have his chance at the food.”

He was frustrated and hungry; we had chicken legs and smoked ham hocks in that trap and he had to watch the other critters go in, eat and leave him nothing,” Cindy said.

That morning, though, hunger won out over caution.

“Bill went back and forth to the trap several times to eat what he could without stepping in, then he barked at the trap to see what would happen,” Cindy said. “Nothing happened. So Bill sat by the trap, then lay down next to it, then finally took the gamble and went in, tripping the door.” 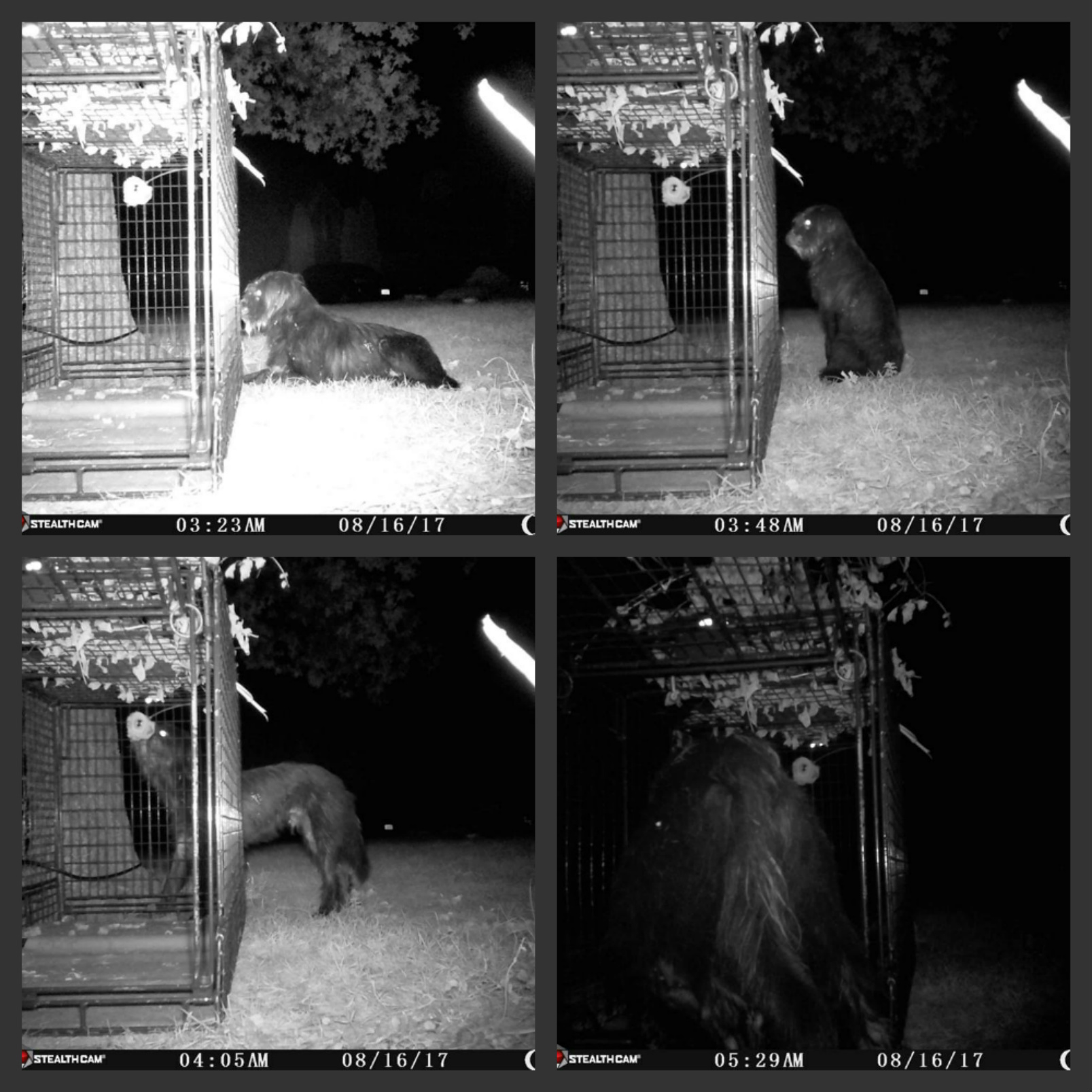 Cindy saw the glow stock on the trap door drop about 15 minutes later. No ‘possum or raccoon this time – it was Bill! 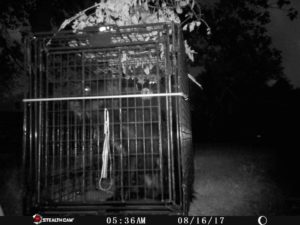 After calling Liz and her husband, Bob, with the good news and helping get Bill to the vet (“He smelled horrible!” Cindy said), Cindy looked at the images on the camera card. They showed why Bill had been barking so much.

“Bill’s story has a happy conclusion, butCindy knows it might have turned out differently if not for the cooperation, hard work, dedication and trust of Bill’s family.

“Thank you, Bob and Liz Skelly Giacomelli, for trusting me,” Cindy said.