From Tip to Tail, a Podcast sponsored by Cuddly’s and Dedicated to Animal Welfare

Susan Taney, Director of Lost Dogs Illinois, joins from Tip to Tail to discuss the evolution of animal welfare and the importance of microchipping our pets.

Great job Jeanette Garlow of Lost Dogs Illinois on this article, Solutions for Dead-End Microchips, featured in the Spring 2022 issue of the NACA Animal Care & Control Today Magazine which discusses the fantastic work being done by Microchip Hunters! You can download a PDF of the magazine and read it on Page 8.

We are very proud of these stats from microchip help!I

Please spread the word about our free services – we would love to help get more pets home! www.microchiphelp.com

Your missing dog has turned up at a rescue and is now available for adoption. How does this happen?

If you find your dog at a local rescue here are some tips to help successfully reclaim your dog.

It is our hope that your dog is home soon!  Returning dogs to their family means that shelters and rescues can focus their resources and energy on helping truly homeless dogs.  Stay calm, cool and professional for the best chance of a happy reunion.

We can’t stress this enough: ANY kind of flyers work AND never assume someone is transferring ownership on the microchip when you adopt!

“Haha, he drew a stick dog, albeit the dog was the right color but still it was a stick dog.”

Joanne J. was helping hang flyers for a lost dog, and saw a hand drawn “lost dog” flyer for another dog. She decided to post it to the neighborhood page she is on; Lost & Found Cats & Dogs on the South/Southwest Side of Chicago, thank goodness!!!

I saw the post, and commented that I was going to reach out to the family, and help get their dog registered and posted with Lost Dogs Illinois. Turns out the phone number on the flyer was for the grandmother of the 7 year old boy that drew the lost dog flyer. She told me it is her daughter’s dog, and that her daughter is at work but that she would get “King” registered right after work. She also described King to me, told me he had been missing since Tuesday, 2/26, and that he was adopted from animal welfare a few months ago (turns out he was adopted from Chicago Animal Care and Control).

I posted this information to Joanne on the neighborhood page. Sue R. had commented there about a dog that was found that matched the drawing of the dog, and Vazquez P. commented with a match to a found dog at AWL! The description and date matched! This dog was named Tiger, so I messaged the grandmother, and she said, “yes, that was his name when he was adopted.” She said the dog sure looked like King!

The daughter, Christina, called me yesterday. She told me she assumed someone had taken King in because she knew he had a microchip so if he turned up at the police station or animal control, they would have called her. I spoke with AWL early Monday morning, and they told me they had contacted the owner registered on Tiger’s microchip by leaving a voicemail, but had not heard back. Christina gave me King’s microchip number and I was able to confirm that two companies still only had the previous owner information. Christina was planning to go to AWL after work.

Christina brought all her CACC adoption information with her to AWL. It included the paperwork that had the microchip number on it. “Tiger” was not listed with AWL on petharbor anymore as of Monday morning so she was concerned. She insisted that this was her dog, and after paying $160 to reclaim him, he is now home! I gave Christina the information she needs to update King’s owner information to her, so this doesn’t happen again.

Great job on making that flyer Joell! We are proud of you!!! You got your dog back home to you!

Thank you to Joanne J., Sue R, and Vazquez P. from King’s family: “Seriously! I wouldn’t believe it if it hadn’t happened to me. I can’t thank you enough. You guys do amazing work, you found a dog from a stick figure picture! “Thank you so much for your help! I never would have found him!!!

Thank you Ev for sharing King’s story in your own words….

If you don’t mind I want to share a story with you. It’s not a Illinois dog but a Mississippi dog. Not sure if you saw the post I originally shared on my page. A kind soul was traveling and found a shepherd mix in Bilxo MS, who a stranger in the parking lot said the dog was roaming for almost a month, so the finder brings him to a shelter in Altanta Ga as it was late at night when he found the dog and had to get to GA.  That shelter scanned and  found a chip but no owner registered so sent him on his way as they couldn’t take the dog.

He brings the dog to Chicago but can’t keep him so puts out a post to find him a new home.  He had over 150 messages to take the dog, so I made it my mission to try and find this dog’s family. I called the shelter King was adopted from in May 2011 Jackson County Animal Shelter in Gaultier MS (the info I found out from the chip). Mind you his chip now had an alert on it as being found. After conversation the shelter & I began with messaging so I could share the video and the info from the chip. They called me and said what would you like us to do. I said I don’t expect you to give me the owner information as I know you can’t but please contact the owner and the finder, Fredo.  I gave them his number.

Motions were set and this boy is going home to his true family. In the meantime I found a lost post for him, he was only missing less then a day when Fredo found him (again bad info from “strangers” can be so misleading to finders, who now think a dog has been roaming for a month!).   Turns out the son who made the lost post, had made a promise to his dad that he would love on and take good care of King, as his dad was dying and just recently passed. Poor King was probably looking for his dad, who I found out always took him in the car to this restaurant where he was found at to pick up food. Fredo in the meantime gave him to a woman, thankfully a good woman who knows he’s not hers to keep. I shiver to think had Fredo not friended me and accepted my messages poor King would of been lost from his family forever. ! Here’s the lost ad I found on King in the meantime while I was in the process with the shelter: 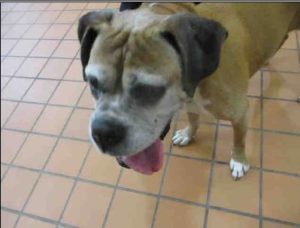 Lost Dogs Illinois has been helping Chicago Animal Care & Control (CACC) with dead end microchips, microchips that no long have current contact information. CACC staff do the best they can, but It is sometimes impossible to find an owner using the available information and given time constraints. However, Lost Dogs Illinois has volunteers who can dedicate hours to tracing disconnected phone numbers and researching online to find relatives of the owner. Sometimes this all comes together in a way that brings tears to your eyes.

A sweet old senior Boxer recently ended up at CACC. The microchip was not registered, but information showed the dog had been adopted out by Anti-Cruelty and they had owner information. It turned out the two owners had split and the girlfriend kept the dog. We reached the boyfriend. He discussed it with his ex and they decided their dog would be better off with him. Needless to say that senior Boxer is now safe at home. The Boxer did not need a home, the Boxer needed to go home! If you would like to learn sleuthing skills to get lost dogs home or if you know a shelter who would like this free service, contact this page.

BTW – the boxer’s name is Zoey! 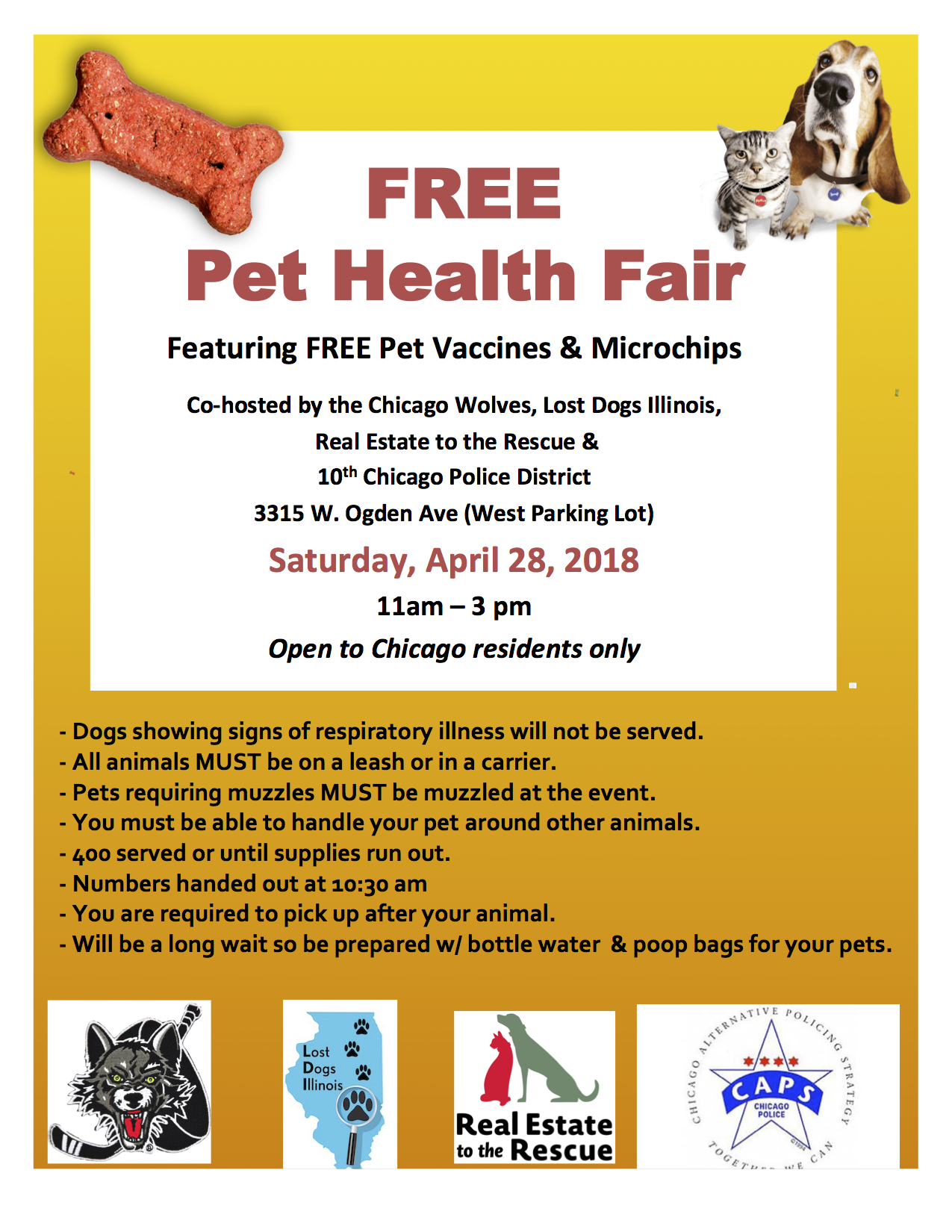 This year already  Lost Dogs Illinois has partnered with several groups to offer free vaccines, microchips, collars and leashes and engraved ID tags. We pride ourselves in helping to preserve the human-animal bond.

April, 2017 – LDI partnered with Garrido Stray Rescue Foundation and Realtors to the Rescue to offer Free microchips and engraved ID tags to over 120 dogs and cats at the 16th Chicago Police District. 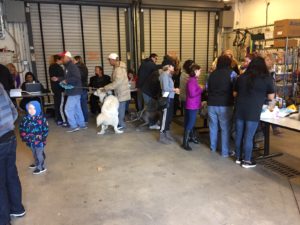 May 13, 2017 – LDI partnered with the Chicago Wolves to provide free services to over 535 dogs and cats at the McGuane Park, Chicago.

May 21st LDI along with One Tail at a Time and Alive Rescue offered free services to over 350 dogs and cats in the South Lawndale area. 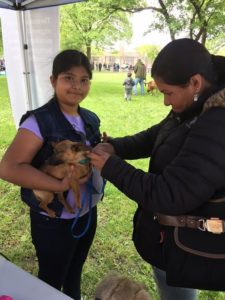 To round off our spring events, LDI attended Pawberry Lane Open House in April to provide free microchip scans. 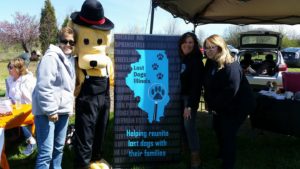 LDI provided free microchip scans at the Humane Society of Aurora in May. 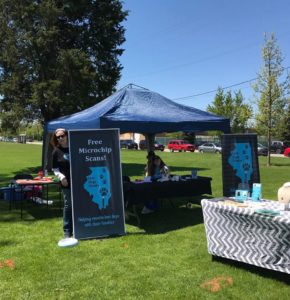 Thanks to Perfect Pooches rescue Lost Dogs Illinois was able to share a booth with them at the Paws on Route 66 in Joliet. 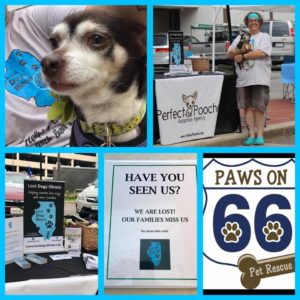 In the past, before the advent of today’s technology, the internet and social media, we had few options when it came to looking for a lost pet. Putting up flyers around the neighborhood and checking the local shelters were among the few choices available.

Along with the obvious options of microchipping, purchasing ID tags, even getting your pet tattooed, there are also methods or ensuring you’re reunited with your pet should they become lost. When inserting a microchip, make sure it’s properly registered and keep the information current if you happen to move, change your phone number or other contact data. Especially if you lose your dog, be sure to contact the chip provider and ensure the info is correct. 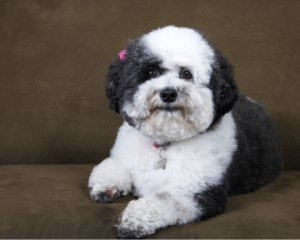 Keeping this in mind, here are some other ways to help ensure you’ll be reunited with your pet should they become lost or stolen:

For animal lovers, many of us post pictures of our pets online and this could be helpful if they go missing. Keeping your online friends informed about the connection between you and your dog could come in handy if you reach out to them to help locate your pet.

Again, back in the old days, when a pet went missing one of the first things we did was post flyers around our community notifying our neighbors of their absence. This is still one of the most successful methods of finding a lost animal, but think about using the internet to spread the word online as well.

Many of our email and text contacts are friends and family that live nearby. Send a post to them with a picture of your pet and ask for their assistance. Then request they forward this message to their nearby friends and family. This way your message has the potential of reaching hundreds or even thousands of other recipients.

Other Avenues To Explore

Speaking of the internet, don’t forget other options like checking out the Lost Dogs of America website. Here you can put a online listing about the loss of your pet and check to see if someone has posted they have found your dog. They’ll also provide you with a free flyer and list it on one of their individual Facebook pages according to State.

Thank you Amber Kingsley for your article contribution.