This week I, personally and professionally, learned a valuable lesson, never ever underestimate the survival instinct of a dog. I, because of this underestimating, did not do everything in my power to find a dog until a full day had almost passed which could have contributed to this dog losing her life. All because I underestimated a 5 pound chihuahua dragging a leash. 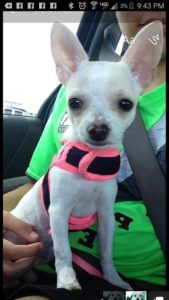 This past weekend, Memorial day weekend I was sent a text message by another ACO from our neighboring AC about a tiny little chi who was lost in a forest preserve that was next to my territory. The family had been out at a party enjoyin the Memorial Day holiday and had their dog on leash. A bigger dog, not on leash, ran at this little dog, Blanca. Blanca in fear took off and the owner lost control of the leash. So the last the family saw of their little girl was her running through a parking lot in the forest preserve dragging her pink leash. They looked and didn’t see her again that day.

I found all this out about ten oclock that night. It was too late for me to get in the forest preserve (they lock the gates at the entrance). The rangers gave me permission to enter the park but without my vehicle because of the gate. Where they had seen Blanca was over a 1/2 mile inside the park and it was now pitch black. I would have never seen her if she was running around. In addition this forest preserve is large, has at least five different shelters, a running path and I didn’t have any idea even where I would look.

The whole night I was upset that I couldn’t help figuring this little one had no chance to survive the night. How would this little girl especially dragging a leash survive out there? Forest preserve is 99% forest. I figured she was either going to be eaten by a Coyote or her leash would get caught on a tree or a stump somewhere we would never find her and she would starve to death.

I went out looking for her at 7:00am the next morning hoping to see her. I did not and I really still wasn’t in the right mode because I honestly thought she was dead. Then later that afternoon I received a message from the family that she had been seen, that morning, and was still dragging her leash. I was thrilled and upset all at the same time. Here I was not doing what I would have normally been doing because I didn’t see how this little five pound little girl had survived but she did. But she was alive and she was depending on us to save her.

I jumped into the mode I should have already been in. I went out with a friend and our two dogs just to walk them out there. I brought food to set up a feeding station along with our trail camera. I had the family meet me out there to leave an article of clothing near our feeding  station and to just go out and hang out where she had last been seen. It was dusk now and the Park Rangers had given us permission to stay out there past closing time when it was quiet and dark. I felt we were doing what we needed to but about 12 hours too late because I didn’t expect this dog to still be alive. I was still kicking myself because if she did not make it I would feel responsible. We didn’t have a sighting but I felt more hopeful even though I was still very concerned about her getting this leash caught on something.

I drove out the next morning before I was on duty (dogs are known to be seen at dawn and dusk) and saw a guy at the maintenance facility which is where she had been seen last. I asked about if he had seen any dogs. He asked me, do mean the Chihuahua? I answered yes and how did he know. He said the family had just picked her up. Tears came to my eyes and I couldn’t believe it. She had not only survived another night avoiding coyotes and getting her leash caught on something, she had made it home to her family. The tears, of course fell. I asked the guy how they found her. Well next to the maintenance facility is a community garden and next to that garden, in plain sight are two sinks with legs. So this little girl has gone two days without getting her leash caught on a tree or stump in the forest where we would have most likely never found her and she would have starved or been coyote bait. Yet now she gets her leash caught on a leg to a sink right in plain sight where she was easily seen and couldn’t get away. Her dad had already come by earlier that morning, found her and brought her home.

This little one defied all odds and did it all on her own. If she had been bigger and not dragging her leash I would have been in a different mindset but instead I underestimated their amazing abilities and instincts. Yes, there was obviously some luck involved but with lost dogs you never know and I learned, you should never ever get up on them. They might just surprise you. And this story could have been very wrong but this little girl showed me that a 5 Chihuahua who misses her family has the will and ability to survive. 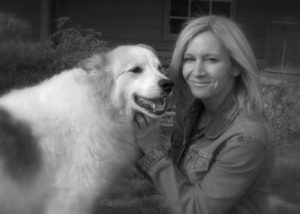 Thank you, Dana, for sharing your story.  Dana is the animal control officer for North Chicago.