Lucy backed out of her harness March 24th while at a family friend’s house in a gated community. There were sightings the first few days but people were chasing after her trying to catch her. She was running in fear from everyone between the gated community and a nearby trailer park, squeezing in and out of the wire fencing. 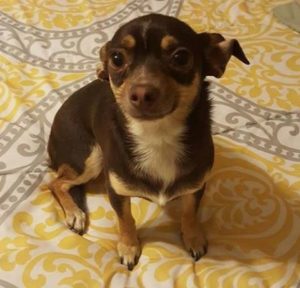 Then the bad weather came. Rain, Rain and more rain. Lucy’s owner and a good friend, as well as some volunteers got together and flyered all around the last sighting areas. Intersection signs also went up. There was much concern with the cold and rain. A day or two went by without sightings. Then another sighting but outside the gated community about 1.5 miles south. Lucy’s owner was able to spot her alongside a very busy country road. Lucy looked right at her mom and turned and ran. It was at this point she realized Lucy would probably need to be humanely trapped, something she was concerned about and hesitant to do. The days went on with a sighting a day… she was in someone’s garage… she was sitting on someone’s front stoop…When she was in an area, we’d try to get her to stay with a feeding station monitored by a camera but Lucy wasn’t ready to set up a “safe space” yet. Her owner and good friend continued to flyer around sightings so we wouldn’t lose track of  Lucy’s travels.
More rain and more cool weather but still no Lucy. Another call came in; this sighting was in Lucy’s small neighborhood, 2.5 miles from where she was lost, and just four houses from her home. Again with the camera and feeding station with an additional feeding station set up at her house. No Lucy. Then another call from a few houses over. Lucy was running around and under the decking of the neighboring house, a log cabin. There were a lot of hiding spots in this neighborhood. We were hoping she had set up a “safe space”. We set up the camera and food station again and caught her on camera the next day!
We moved a trap in… no go. Then the weather turned bad again. Rain and rain and rain with freezing temps. At this point Lucy had been lost for almost 2 weeks. Residents were skeptical she was still alive, saying there are coyotes and hawks. I told them, you’d be surprised. With the cold weather setting in, out of concern, Lucy’s Mom sat in the rain from a distance while she called Lucy calmly. She could see under a lot of the decking and nope, no Lucy. This morning we baited and set the trap again…some yummy hot and steamy ribs and fried chicken! Within an hour we had Lucy on camera at the trap and within seconds, she had tripped it!!!
When her owner and I showed up to take her out of the trap (in a contained enclosed area), Lucy didn’t recognize her Mom at first and growled and showed her teeth. This is typical with a dog that’s been pushed into survival mode. Within a few minutes though, Lucy was wagging her tail and ready to get out! 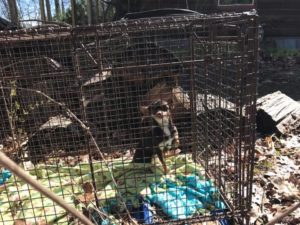 After seeing the vet this afternoon, Lucy was given the all clear. She is dehydrated and needs to put some weight on but is pretty healthy overall after her nearly two week ordeal, proving that dogs are resourceful and survivors.  Great job Erika, Connie, Laura and everyone else that assisted with flyers, support and positive thoughts! Another lost dog is back home to safety! 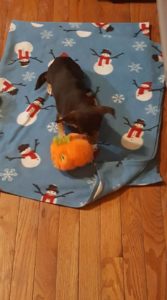