Minnie was what we call a “Kentucky Stray”.  She was transported from a high kill shelter in one of the states south of Illinois and brought up to a rescue.  Minnie went into a foster home but unfortunately escaped.  Dogs who are used to being out on their own take time and patience to get them comfortable with a home environment.
Flyers were posted when Minnie first went missing.  Calls were coming in and her foster mom would rush to the location but she would be long gone by the time anyone got there. Minnie was figuring out where to find her necessities; food, water and shelter.
After she was missing for about a week and a half, a group of volunteers offered to start mapping the sightings, doing more flyers, and doing “driveway drops” hear sighting locations.   She was very, very, close to her home but a busy street was between the area where she was living and her home.
With the flyers and drops, more sightings came in and a pattern of location and time started to emerge.  She seemed to travel at night, which is very common  for dogs in survival mode.  It keeps them safer from predators, including humans.  It’s quieter at night…
While looking at her pattern, we noticed a few houses on Caton Farm that had pole barns.  One of the volunteers knocked on a door and asked if she could look around the property.  The owners were eager to help and let us do whatever we needed.  The volunteer found a pole barn, with an opening in the back. She also found several canine prints that were Minnie’s size, along with some dog poop.  The home owners had dogs but said theirs did not go back to that part of the yard.  The back of the pole barn was alone a fence line, and on the other side of the fence was a subdivision of town homes where there had been sightings of Minnie.  She was definitely there.  We thought maybe staying in the pole barn for shelter. 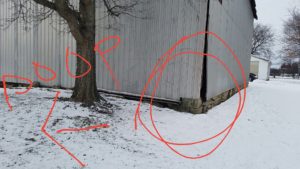 Signs that a dog was living there. 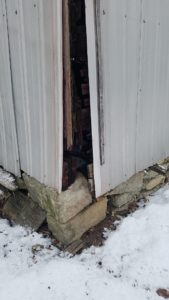 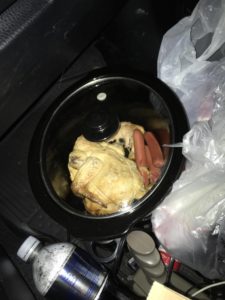 Using a crock pot of smelly food to keep Minnie in the area. It was very cold out.

Since the flyers were doing their job, the next step was food and a game camera.  A camera was put up on Friday and food was trailed into the subdivision and along the fence where we thought she was traveling. Saturday morning proved what we thought.  Minnie showed up the night before and was eating the food.  That night a trap was deployed, more food trailed and within a half hour of setting it all up she was back.  It took a short time for her to decided she wanted the yummy chicken legs in the back of the trap and she was safely caught! 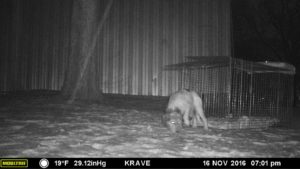 Minnie checking out the trap 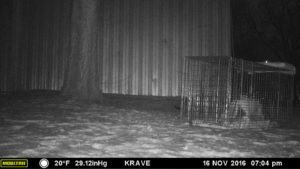 After a week and a half of trying to catch a glimpse of her when the sightings were called in, more flyers went up on day 13, driveway drops done on day 14, sightings mapped on day 15, camera and feeding station on day 16 and safely trapped on day 17.  Following the advice of Lost Dogs Illinois and Helping Lost Pets make this a textbook rescue.  Minnie was eventually adopted by her foster family and is now known as Lucy and is loving life. 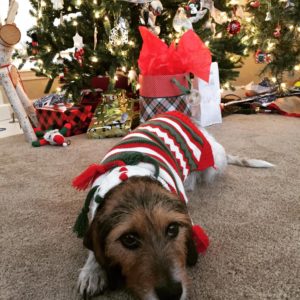