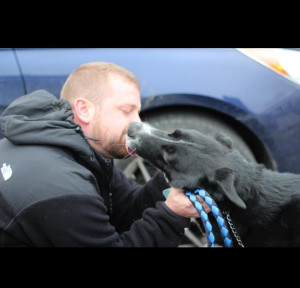 We’d like to share an inspiring story about Payton, German Shepherd-Black Lab mix owned by Rick from Glendale Heights, who went missing recently from a family member’s home in New Lenox.  Payton was supposed to spend a few days with Rick’s cousin, but being the shy boy he is, didn’t even want to get out of the car that morning….until the doors were left open for him…and then he saw his chance to bolt!  Neighbors, Animal Control and the Police Dept. were notified immediately and, though there were a few sightings (so they knew he had stayed in the area)  friends and family driving around all day looking for him just could not find him.  Everyone felt he was looking for Rick, who was out of town!

Flyers were put up all over the next day, and Payton’s info was shared on several sites, including Lost Dogs Illinois.  Upbeat attitudes faltered as there were no sightings this day.  A paid call-search site was contacted and calls went out to surrounding neighbors the next morning.  Rick’s fiancee, Cassandra,  began getting calls of sightings, but whenever she went out,  Payton was nowhere to be seen.

Following guidance from Will County Animal Control, LDI, etc., clothing with Rick’s scent was put out, along with food, and a humane trap.  Cassandra even kept some of Rick’s clothing dangling from her car as she drove around in her search!  Another fruitless day went by…..

On the fourth day of Payton’s disappearance, with Rick back at home,  he, Cassandra, neighbors and friends, (especially Phil and Robin and Laurie from Will Cty AC who spent time on her days off), after passing out more flyers and business cards, searching, and taking more calls of sightings FINALLY saw Payton for themselves as he crossed Rt 80.  Rick screamed for him as Payton re-crossed the busy highway back toward him.  Though they were hopeful, Payton still managed to elude them all.

Animal Control was ready the next day with tranquilizer darts, as Payton was again spotted at the edge of the woods.  Everyone thought this drastic measure would be necessary as Payton, timid by nature, had to be terrified after 5 days out on his own!.  Payton stayed put, as Rick walked toward him.  If he were to come to anyone, it would be to Rick, who had had him for 6 years, since he was a puppy.  Payton turned back toward the woods.   Rick called his name, and Payton turned around and stared at him, as if in a showdown…..at that moment, frozen in time, Rick remembered a tip he had gotten from Lost Dogs Illinois, that advised him to lower himself to the ground.  He laid down flat, always keeping Payton in his line of sight…..and Payton came closer and closer till he jumped on Rick and began licking his face.  The reunion everyone had prayed for was accomplished!  Missing 2/7/13, Home At Last 2/12/13.  Welcome Home, Payton!

Lost Dogs Illinois would like to thank Rick and Cassandra for allowing us to share this special story of  Payton’s escape and eventual return with all our fans.  We hope that those of you reading this will use the tips and resources available on our site and through their local ACO’s and communities if the need arises.

Please note:  Chemical capture (commonly called tranquilizer guns) is typically handled by trained animal control officers.  There are serious dangers involved with using this type of capture.  Be sure to ask the officer about these dangers and then carefully weigh the benefits vs. the risks.