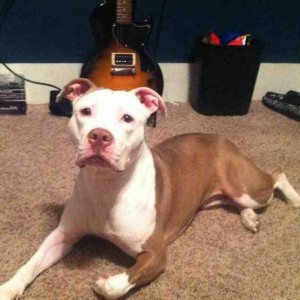 Two-and-a-half years ago, when Army Specialist Phyllip Kennedy came home from Afghanistan to Jacksonville, Illinois he received a very special gift from his sister. It was an adorable white and tan pitbull who he named Chewy. Chewy settled in nicely with him, his wife, Jemeica, and 18-month-old Heaven, and quickly became a member of their family.

On July 23rd of this year, the family had a summer barbeque. While no one was looking Chewy made a dash out the back door. “When she first went missing I was devastated, said Phyllip. “We immediately started walking up and down each street yelling her name for three hours.” Next, he began the search strategies that Lost Dogs Illinois recommends- flyers in the area, signs on poles and at intersections, reports to authorities, visiting and calling animal control facilities, placing familiar objects in the area and posting ads on LDI’s Facebook page and other networking sites like Craigslist.  Strangers he connected with on Facebook even printed flyers and passed them out in their neighborhoods.

Despite these exhaustive efforts, Phyllip went several days without any trace of hope. He said, “After about a week of nobody claiming to have seen her I was starting to worry that somebody had picked her up.” What happened over the next two weeks was one of the most dramatic searches we at LDI have ever seen.

It began when Phyllip received a phone call from someone who saw Chewy’s lost dog ad and said he saw her at a trailer park on the other side of town. Phyllip raced to the site and spoke with the park’s manager. He told Phyllip that residents were not allowed to have pitbulls as pets, but that he had recently seen a kid walking one. The park manager had asked the boy about the pitbull and he claimed to just be dog sitting. The park manager knew who the boy’s grandmother was, so Phyllip went to talk to her. He showed her a picture of Chewy but, Phyllip recalled, “she said that she had never seen a dog like her before.”

Phyllip went to the police station and filed a missing dog report. They all went to the grandmother’s house, but when she didn’t answer the door, the police said there was nothing else they could do. Phyllip didn’t give up. Not believing the woman’s story, he later went back to the trailer park. She admitted that after that visit from the police, her grandson became fearful and sold Chewy. She gave Phyllip the name and address of the people who bought her.

Phyllip called the police with this lead and they met him at the address the grandmother gave him. A woman who lived there gave him some more bad news: her brother-in-law sold Chewy shortly after buying him. The woman gave the police the address of the people who bought the dog and Phyllip followed them there. That’s where the wild goose chase would come to an end.

The police knocked on the door of the house. A man answered and was shown a picture of Chewy. The man said, “This looks just like this dog that I bought today.” By that point, Phyllip knew that these words didn’t necessarily mean that Chewy was there. The man disappeared inside his house while Phyllip and the police waited in the front yard. He returned to the door with Chewy. Phyllip remembered, “When I saw her I called her name and she ran and jumped off of the porch and straight to me, tail wagging and all.” With the surprising news that this man has just purchased another family’s dog, he was happy to return Chewy to her family.

After 15 days, Chewy was back with her family who say they gave her lots of love and then immediately made an appointment to get her spayed, microchipped and registered. When asked what advice he has for those whose dogs are missing he said, “Don’t give up hope! Post it all over the internet, call the police and file a missing dog report, call the local radio station, go door to door with fliers, give fliers to all of the local animal shelters. Eventually the word will spread enough and hopefully, you will get help from all over just like I did. There are still good people out there that care for your baby as much as you do that know that a dog just like one of your kids!”