–March 26, 2012 is a date Jill Grover and her family will never forget. What started as a typical Thursday morning turned into a nightmare when Jill let her dogs Rocky- a bright 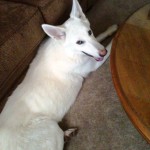 white German Shepherd mix- and Zuess- a Husky- into the fenced yard of their Springfield home. About 5 minutes later she had a bad feeling when they didn’t come clawing at the door like they usually do. “I knew something was not right,” remembers Jill.
Jill looked around the yard and, to her horror, both dogs were missing. Careful to always keep the gates shut, their escape was a mystery. (Jill’s husband, Fred later figured out that when their neighbors put up a new fence, they neglected to tell the Grovers that theirs had been broken in the process. The dogs must have escaped through the hole.)

Immediately, Jill, Fred, and their daughter, Alexis frantically searched the neighborhood. One-year-old Rocky was shy and skittish, they didn’t imagine him getting very far. Zuess, the more outgoing of the two, would be more likely to approach people. Sure enough, about two hours into the neighborhood search, Jill and Alexis saw Zuess running happily alongside a garbage truck trying to get the garbage collectors’ attention. Relieved and optimistic, they ran to the spot where the driver said he spotted both dogs before Zuess began chasing them. Unfortunately, Rocky wasn’t still there.

The family continued the search for Rocky, giving out their phone numbers and a description of the dog to neighbors. “We talked to everyone that would listen,” said Jill. That night she posted ads on Lost Dogs Illinois and Craigslist. The family printed flyers and hung them miles away: at golf courses, at parks, and walls of buildings. They went to the local pound and checked back every single day after that.

Right away, they started getting phone calls, and so began a wild goose chase. Someone called from 4 miles away, but when Jill raced there she couldn’t find Rocky. The Grovers followed up on every tip, each time ending in defeat. Jill said if they weren’t at work, they were searching for their missing family member.

One week turned into three and the family was exhausted. One particularly devastating night, Jill received a phone call at 10:30 pm from someone who said they saw Rocky on the interstate. Terrified and dreading the worst, they raced to the location and drove up and down the surrounding roads, still, no sign of Rocky. Yet somehow the Grovers still didn’t give up hope.

After so many unsuccessful tips, Jill thought to reach out to the local media. She wrote an email to Springfield’s State Journal-Register telling her harrowing tale of the search for Rocky. Like most newspapers, the SJ-R told Jill they couldn’t publish her story as an article. The sad truth is that there are so many missing dogs, the task of running such stories would be overwhelming (which is why Lost Dogs Illinois is here!). They did, however, post a notice  in their Pet Zone section, notifying readers that they could use the Pet Zone Facebook page as a place to advertise lost and found dogs.

Things started to gain momentum one Friday when Fred received a call from a woman named Meg who said she had seen Rocky in the woods on her property, five miles from the Grovers’ home. She said that every morning a big white dog came out to play with her dog. Meg saw Rocky’s picture on Lost Dogs Illinois and then on Pet Zone, and called the phone number listed. She texted them pictures she took of Rocky on his morning visits. Finally seeing a picture of Rocky alive and well, the Grovers were elated.

As soon as Jill got off work, she raced to Meg’s home. She searched the three-and-a-half acres to no avail. Fred came out later with Zuess to use him as a lure, but that didn’t work. Fred decided they weren’t going to capture Rocky without a cage. They went home and rigged one with boards and wire that would trigger and trap Rocky if he walked in. At dusk, they went back to the woods to set it up, baiting the trap with toys and a blanket from home as well as food. It started to rain, and before they turned to leave, Jill saw Rocky in the distance. She knew this method was going to work.

Saturday morning Jill and Fred drove back to the woods to check the trap, and sadly, Rocky wasn’t in it. It had been almost four weeks since losing him and this was the closest they’d been, so there was no way they would stop trying. They checked in on the trap periodically all weekend. Finally, at 8am Sunday morning Meg called to deliver the news they had been so desperately waiting for. They caught Rocky in the cage. “Like a crazy person, I drive out there and sure enough, there was my Rocky!” remembers Jill. “[He] was soaked to the bone, dirty, and a mess, but very happy to see his mommy.”

The Grovers immediately took the much skinnier dog to the family vet. He had lost 20 lbs, had sores on his paws and was covered in ticks; all expected from a month in the wild. He is now on medications and his progress will continue to be followed by the vet. With time and much-needed attention from his family, they expect a full recovery. Rocky is finally reunited with his brother Zuess and bathed back to his bright white coat.

All throughout the month-long emotional rollercoaster, the Grovers never ever stopped trying to find Rocky. The long days and nights were worth it and their hard work paid off. Jill is very happy to report, “We are a happy family again!”