Stephanie was at work when her husband called. “I lost our daughter,” he said in a panic. Mark was referring to their lab mix, Brinkles, who’d been in their family seven years- since she was a puppy. “I had to calm him down and reassure him that Brinkles was okay and that we would find her,” said Stephanie. 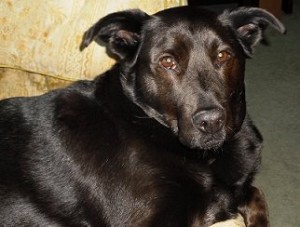 Mark was calling from Montrose Dog Beach on Chicago’s North Side. Brinkles and their other dog, Charlie loved playing at the beach. Chicago Park District’s first legal off-leash beach, it is very popular and quite busy- especially in the mornings. Stephanie and Mark took them there weekly in the summer and at least monthly in the colder months.

That particular day, Charlie had escaped to the neighboring beach, restricted to people only (The dog beach is gated and fenced on two sides- the lake being the third. But there are ways for sneaky dogs to get out.) Mark chased after Charlie, assuming Brinkles was at his side.

Meanwhile, a woman named Eileen saw Brinkles hanging out near the gate, looking for a way out. She asked around to see if she belonged to anybody. The dog beach has a rule about dog owners remaining with and watching their dogs at all times, so she thought Brinkles may have been abandoned. Out of concern for her well-being, Eileen took her home to keep safe while she made efforts online to find an owner.

After wrangling Charlie, Mark came back to the beach area, getting ready to take the dogs home, when he noticed Brinkles was missing. He too talked to people nearby and they told him about a woman who left with the dog but they didn’t know her name or how to reach her. That’s when Mark called Stephanie and set a plan in motion to get her back as quickly as possible.

Mark raced to Stephanie’s work and they immediately went to the city pound- Chicago Animal Care and Control. On the way there, Stephanie used her phone to post an ad on Craigslist– a common place for lost and found dog ads. When they had no luck at the pound, they turned back home to brainstorm more methods of finding Brinkles. Stephanie got on the computer and had a message waiting from someone who saw her Craigslist ad. They didn’t have any information about their dog, but told her about Lost Dogs Illinois.

It had been three hours since Brinkles went missing when Stephanie filled out the Lost Dog Report on LDI and we posted it on our wall. Our fan network responded with a quickness; one of them referred her to the Montrose Dog Beach’s Facebook page. Sure enough, there was a picture of Brinkles that had been posted by Eileen. Stephanie and Mark were ecstatic.

The day after she went missing, Brinkles was home safe and sound with her parents and brother Charlie. Stephanie remembers, “She was thrilled to be home and went straight to her food bowl to chow down.” After that, the family cuddled on the couch all day.

If it weren’t for the network of kind strangers who went out of their way- Eileen, an unknown Good Samaritan on Craigslist, and a very clever LDI fan- who knows where Brinkles would be now. “Thank God for nice people,” says Stephanie. And to the LDI Facebook community, she has a special message: “Thank you all for your help in getting our girl home…you all are amazing!”