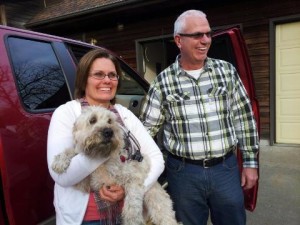 On April 29, 2015 Lost Dogs Illinois wrote a plea to our LDI Fans to support House Bill 4029, which would support more reunions of lost dogs with their families.

We are happy to report that the Bill 4029 has passed.

This bill requires shelters and rescues (the same as animal control facilities) to scan intake animals for a microchip multiple times before releasing the animal. It also includes veterinary clinics and hospitals that provide this same service to do the same.

The bill also requires that if the first person listed on the microchip cannot be contacted, the shelter must notify the second contact if one is listed.  Also, shelters must notify the owner when they are identified and transfer dogs with identified owners to a local animal control or law enforcement agency for the animal to be reclaimed.  If they cannot transfer the animal, they must hold the animal for at least 7 days prior to removing the animal.

Thank you to Senator Thomas Cullerton, the key sponsor of the bill.