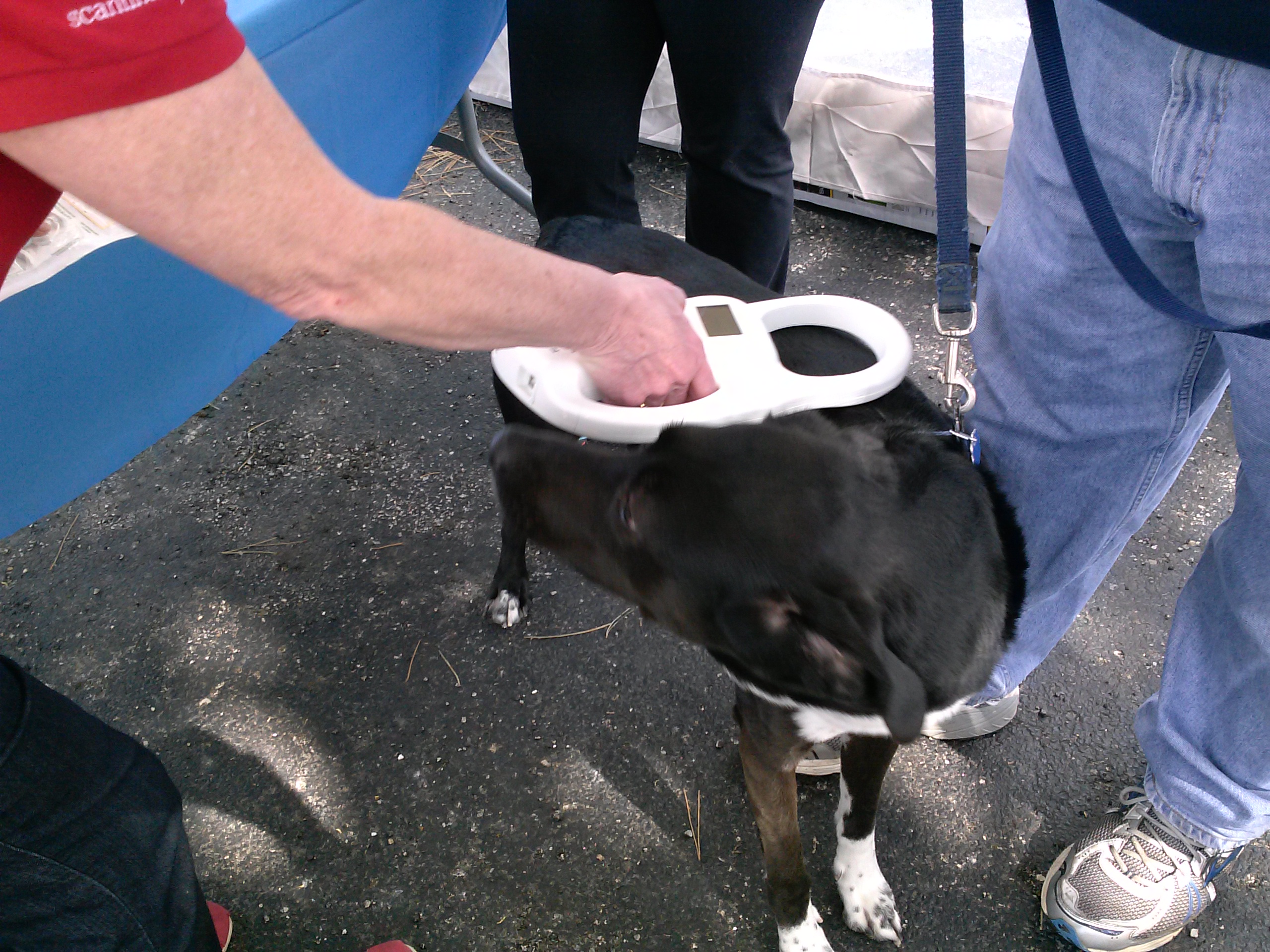 Disclaimer-Lost Dogs Illinois believes all dogs should wear a collar with an up to date readable id tag and have a properly registered microchip.

We know microchips work in helping pets get home when all the pieces fall into place.

First, the animal is brought to a vet clinic, rescue/shelter or animal control facility that scans every animal entering the facility using AVMA standards and has a universal scanner with working batteries that reads all chip frequencies and then:

All too often we hear reports of found dogs that have chips but; they are not registered, not registered to the correct owner or the information is out of date. At events where we offer free scans to dogs many owners do not understand how microchips work and that they need to register the chip and always keep the information up to date.

So to help get the pieces into place we strongly urge you to make sure your pet’s microchip is registered to you and the proper animal and your information is always kept up to date.

Annapolis and Gizmo were playing in their yard in Bureau, Illinois in June of 2013 when they both got out through a hole in their fence. Immediately upon discovering they were missing, their owners, Stefanie and David, ran around to the front of the house only to discover Gizmo standing right there in front of them and Annapolis nowhere to be found! It was if he had vanished into thin air!

Stefanie and David registered their lost dog immediately with Lost Dogs Illinois, and then they set out searching for him. They scoured the neighborhood going door to door and hung flyers everywhere they could think of. They contacted every vet clinic, humane society, and shelter in the area, only to be told he had never been found. Any potential sightings only led to dead ends and disappointment. They even went to local adoption events thinking they would somehow locate him. Yet all their hard work never paid off.

However, his owners never gave up hope! They each had a set of websites that they checked daily that included every humane society, shelter, and animal control facility in the area. They checked craigslist, liked every dog-related Facebook page they could imagine, and they followed up on every lead and every sighting, even going places in person to check if it was their beloved Annapolis.

Then on December 23, 2014 Stefanie was perusing the local shelter pages when she came across a post for a male chiweenie who was up for adoption. He was listed under another name, but she was almost 100% positive this was Annapolis. Once they got a hold of the shelter, Stefanie and David made the hour-long drive to the Henry County Humane Society to see if this was their dog. When they got out of their car, a volunteer was just taking the dog out for a walk. As soon as they saw the dog, they immediately knew this was Annapolis! He came running up to them with his tail wagging as if he knew he had finally been reunited with his owners.

Now that they had finally found him, they wanted to know how he had ended up at the humane society. They were told that the local police had found Annapolis running loose in an industrial area and that no one ever claimed him. He was surrendered to the local no-kill shelter in Henry County and was being prepped for adoption when Stefanie happened upon him on that Tuesday just before Christmas.

Annapolis finally arrived home on January 7th, 2015. He settled in right back into his old routine. It was if he never left!!!!

Stefanie wanted to share a few words of wisdom with those still looking for their lost pets:

“I would of never thought to microchip my pets, I have a fenced in yard and live in a small town, everyone knows everyone and their pets. But now I know you can never be to safe! My dogs now are chipped, collared, and never left unattended in my yard.

When losing a pet you never want to give up hope. Yes it might get hard to believe your pet will be reunited after a month even more after 6 months and after a year your hope might slim but always keep looking never give up, We would of never  found Annapolis if we would of just gave up.” 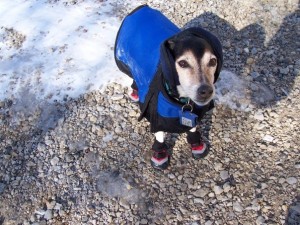 With the weather becoming blustery, dog owners might consider the following safety tips:

Bundle up and enjoy! 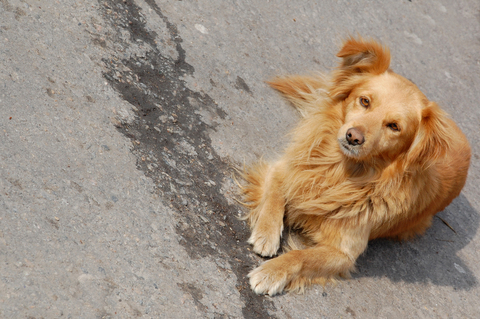 You know Lost Dogs Illinois provides free posting of lost and found dogs in Illinois, reuniting over 22,000 dogs in our nearly 6 years of existence, but did you know we do more than that?  Take a look below and read about the other services we proudly provide to the Illinois dog community:

www.lostdogsillinois.org is the LDI website packed with educational and resource materials to help prevent losing a dog and guide lost dog owners on how to find their dog.  Articles providing resources and action plans are just two of the great resources.

Tips, articles and other useful resources to assist in finding a lost dog or a lost dog’s owner are posted daily on our Facebook page.

Community Outreach Events are an important way for LDI to spread the word about our services, provide educational handouts and provide free microchip scans for dogs.  Also, thanks to an ASPCA grant, LDI is now able to make engraved id tags on the spot at events and provide them at low cost to pet owners.

We believe microchips are an essential part of identifying lost pets and LDI donates microchips to be used by shelters, rescues and animal control agencies at low cost clinics.

Education for Animal Welfare Professionals; LDI believes in working not only with the public but animal welfare professionals by presenting best practices for starting a lost dog recovery team and increasing return to owner rates for shelter/rescue/animal control staff.

Also, for owners of lost dogs and finders of lost dogs we don’t just post the dog; they receive an informational email and are directed to our website for tools and resources in lost dog recovery.

So, there is a lot more going on at Lost Dogs Illinois than just the lost and found postings on our Facebook page!  We thank you for your support of all our work. 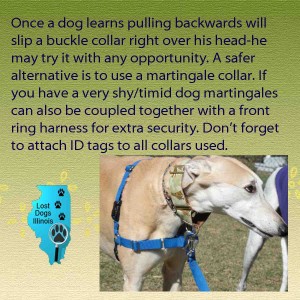 How can rescues and shelters prevent  high flight risk dogs from escaping from new adopters, foster homes and even their own facilities? And how can they correctly react when a dog does go missing?

These next few articles will focus on this, starting on how a shelter or rescue can prepare their staff, foster homes, and new adopters for high flight risk dogs.

1. Microchip every dog as soon as it becomes available for adoption, and ENROLL the microchip to the new owner. Some microchip companies do this for free, others have a charge. Offset the cost by adding the enrollment charge (if there is one) into the adoption fee. Simply sending the dog out the door with the paperwork is not enough. Most people have good intentions but may lose the dog before they get the microchip paperwork sent in. They may have just plunked down several hundred dollars for an adoption fee and supplies. The microchip paperwork may get set aside until the next payday and by then it might be too late.

2. Put visible identification on every foster or newly adopted dog before it leaves. ASPCA research shows that 89% of newly adopted pets were still wearing the tags a shelter or rescue put on them six weeks after adoption.

3. Use a martingale collar on every dog (see photo above). These are great for the shy dog that has learned to back out of a standard collar. Also, consider using a sensation harness along with a martingale collar (either by using two leads or clip the lead to both O rings) for those that are extremely high risk.

4. Educate your foster homes and new adopters on the challenges of high flight risk dogs. Put together a packet of information for them to include in their adoption paperwork. Here is a sample from Lost Dogs Illinois that you can use. 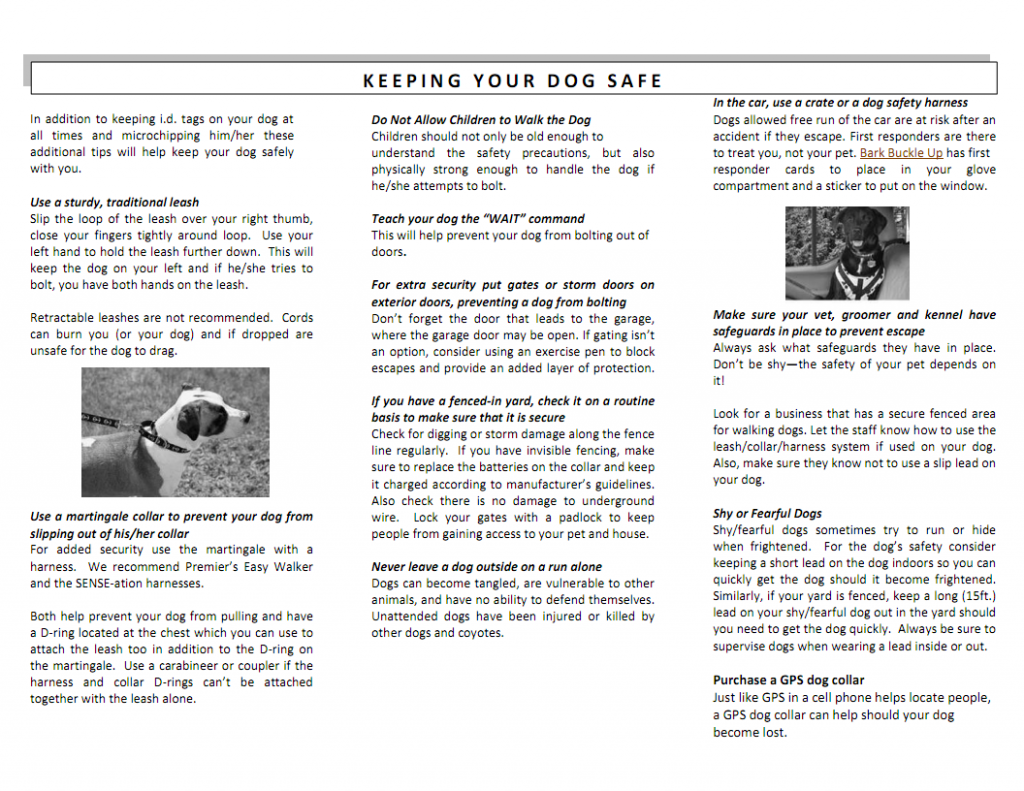 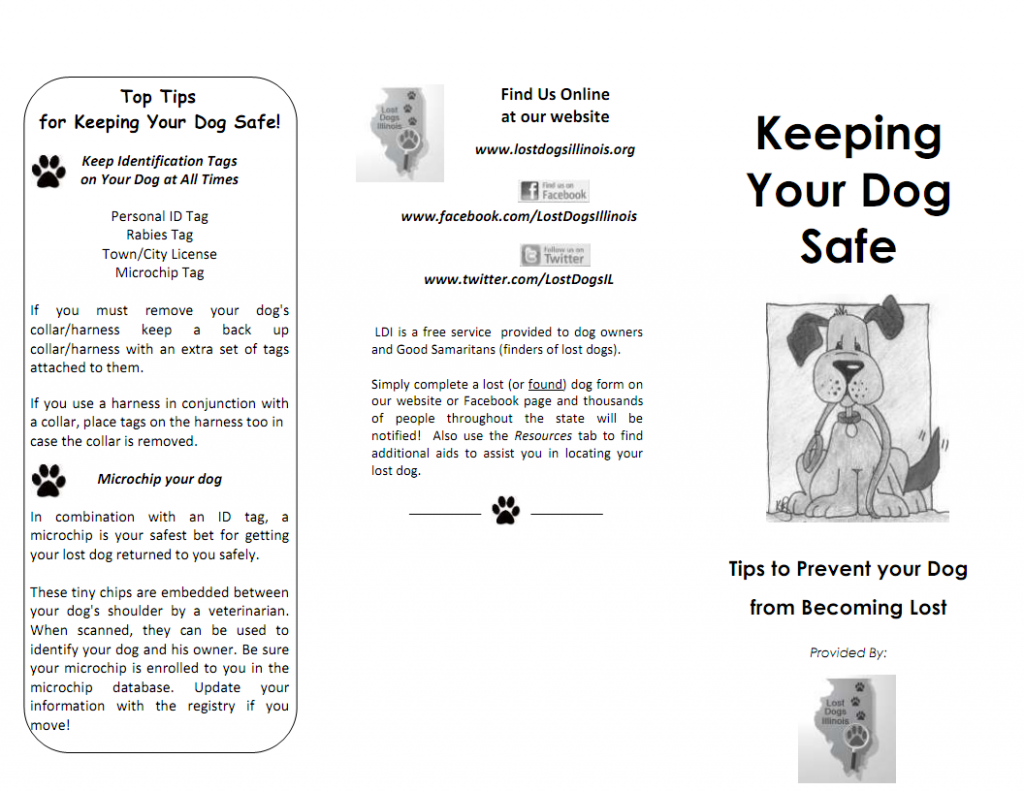