Here at HoundSong we believe in an open door. We have long proselytized the open sharing of what happens from day to day in our rescue. An easy thing when all is good and the stories we share are like handing out warm chocolate chip cookies. Not so easy a thing when we “screw the pooch”. Grab a coffee; kick up your feet, here comes the story of most ridiculous gaffe ever made in the search for lost dog.

On Wednesday, Febuary 5th 2014 LadyBird the Beagle went “missing” from her foster home. 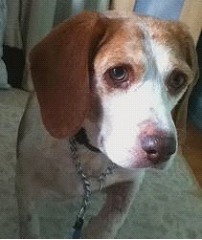 LadyBird is an odd cookie. Others have called her a puppy-mill dog. This is somewhat of a misnomer. She was a breeder dog, but not from a puppy mill environment. She does suffer some of the same malady’s common to puppy mill dogs. She is a timid, antisocial, brooding, sort of gal who is not particularly interested in interaction of any sort. She is a “duck and cover” gal. She can hide in plain sight…like a Ninja. LadyBird, the Beagle Ninja.
(…and thinking about it now, if she were a Black Ops Specialist, she even has a cool code name. Haven1, this is LadyBird.
This is Haven1, go ahead LadyBird
I have eyes on the package, are we ROE clear?
Red light! I say again, Red Light!  We are not ROE clear. Hold at Epsilon 1. Cover and observe.
Copy Haven1, hold and cover. Observe but do not engage. LadyBird out.)

LadyBird’s ninja like skills is why, at first, her foster mom did not panic when she seemed to be missing. It is not uncommon to go most of a day and not see, or only have a fleeting glimpse of, LadyBird. In what has become a practiced routine, her foster mom set about a search patrol of all LadyBird’s usual hidey holes. Behind the couch, under the computer desk, behind the toilet, under the bed. One by one these locations were searched and cleared. One by one these locations were empty. After about 4 hours since the last LadyBird sighting, frantic destruction of the entire house began. At 8 hours and a search of the house, yard, and neighborhood, it seemed LadyBird had gone off mission…
LadyBird had gone rogue.

We have been rescuing hounds for 18 years. In those 18 years, the wanderlust of the hound has afforded us a particular set of skills. We have searched for A LOT of dogs. Add to these the dogs for whom we have used the skilled nose of our Bluetick Coonhound, Ranger, to track and locate for other people, and we have spent more hours stooped over muddy prints in the rain and baiting feed stations than I care to count. My point being, we are not amateurs. We know how to get it done. Or so we thought…

We spent the next week following our lost dog SOP(Standard Operating Procedure).
Phone calls to authorities – Check.
Fliers and posters – Check.
Boots on the ground (in snow up to our asses) and eyes on task – Check.
…and so on and so forth right down the list.
We followed the procedure, as we had SUCCESSFULLY done a hundred times. My wife, in her usual obsessive manner, drove off an entire oil change up and down every street and alley with her wide, panicked eyes peering into every shadow as though this could be the moment we found her. We tripped and tracked behind every print in the snow as though our hopeful steps would surely lead us to old LadyBird. We did, as we had always done on every search. Only this time nothing happened. Not even a sighting.
In 18 years we have never had that happen. We always had at least a sighting.

By the 5th day we were deeply worried.
On the 6th day, at 10:30PM, LadyBird was found pattering around in the backyard of her foster home as though she had never left.

…and she hadn’t.
She was in the backyard the whole time.

This is all we saw! 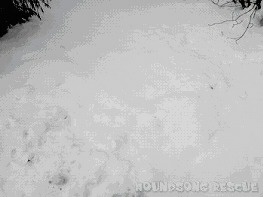 I want you to keep in mind we had searched everywhere in the house and yard for LadyBird. We had gone as far as poking snow drifts with a broom handle like we were searching for an avalanche victim.

The foyer to LadyBird’s underground bunker. 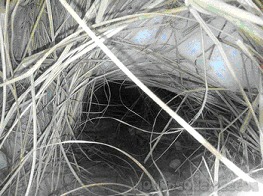 LadyBird had made herself an “underground” bunker with a hidden secret entrance that would make the designers of NORAD jealous.

Oh look, a hallway! How Quaint! 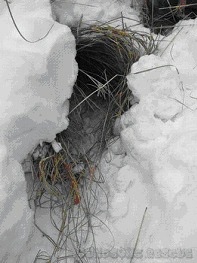 Peeking into the common use room 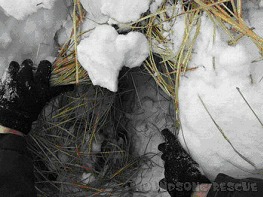 She divided her bunker into three areas. A entry, a common area, and sleeping quarters, all joined by a short hallway at 90 degrees to the previous “room”. 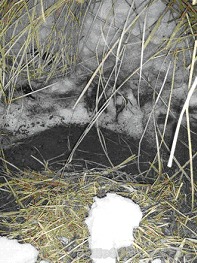 Here, back far enough where not even the most harsh weather and strongest winds could not reach her, is the sleeping quarters. We found her choker collar here. So cozy a room had she made for herself, while it was about 10 degrees outside, the collar was warm to the touch.

What was left after we nuked her bunker. 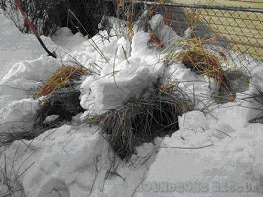 So…
You can laugh at us if you like.
Feel free to call us stupid. You can even accuse us of being irresponsible or remark how unbelievable it is that we left her there…in some of the worst weather “the region” has seen in years…to shiver and suffer in the cold.
Truth is, we have no excuses.
It seems unfathomable that we did not find her hiding, in the snow, under decorative grasses, just 35 feet from the backdoor of her foster home. It seems unfathomable and inexcusable. However, our mistakes are not the moral of this story.

The moral of this story is multifaceted.
1. When searching for a lost dog, never rely on what you “know”. Our experience blinded us. We had searched the yard for LadyBird. Not seeing any tracks or visible sign of her presence (and having poked to death the snow drifts with a broom handle)we wrote it off a possibility. We went about our search thinking like people, rather than like a dog. We approached this search as we had approached a hundred others, seeing it through the eyes of all our previous searches…when we should have tried to approach it using LadyBird’s eyes.
2. Double Check and Triple check. Even if you have searched an area, search it again. Even if your dogs is not hiding under a bush in your own yard, he/she may return near home from time to time.
3. Do not give up. In severe weather (or severe experiences like tornado’s or floods)people have a tendency to assume “Fluffy could just not have lived through that.”  In temperatures as low as -30 degrees, inches upon inches of snow stacking up all over the area, and without a single sighting of her, we were just a day or two from assuming the worst for LadyBird. Nagging in a dark corner of our minds was the thought that LadyBird had been hit by a plow and was buried somewhere under one of the mountainous piles of snow along the roadway.  We were very close to calling it hopeless….for you and I it would have been hopeless. For our animals though…well…when it comes to staying alive they are just smarter.

We post this in the hope that others may learn from our mistake.
Never assume…always look with unfettered eyes…and always know that, in terms of survival, you are not smarter than your dog.

Thank you Darin of RodDar Houndsong Rescue for your honest account of LadyBird’s adventure.