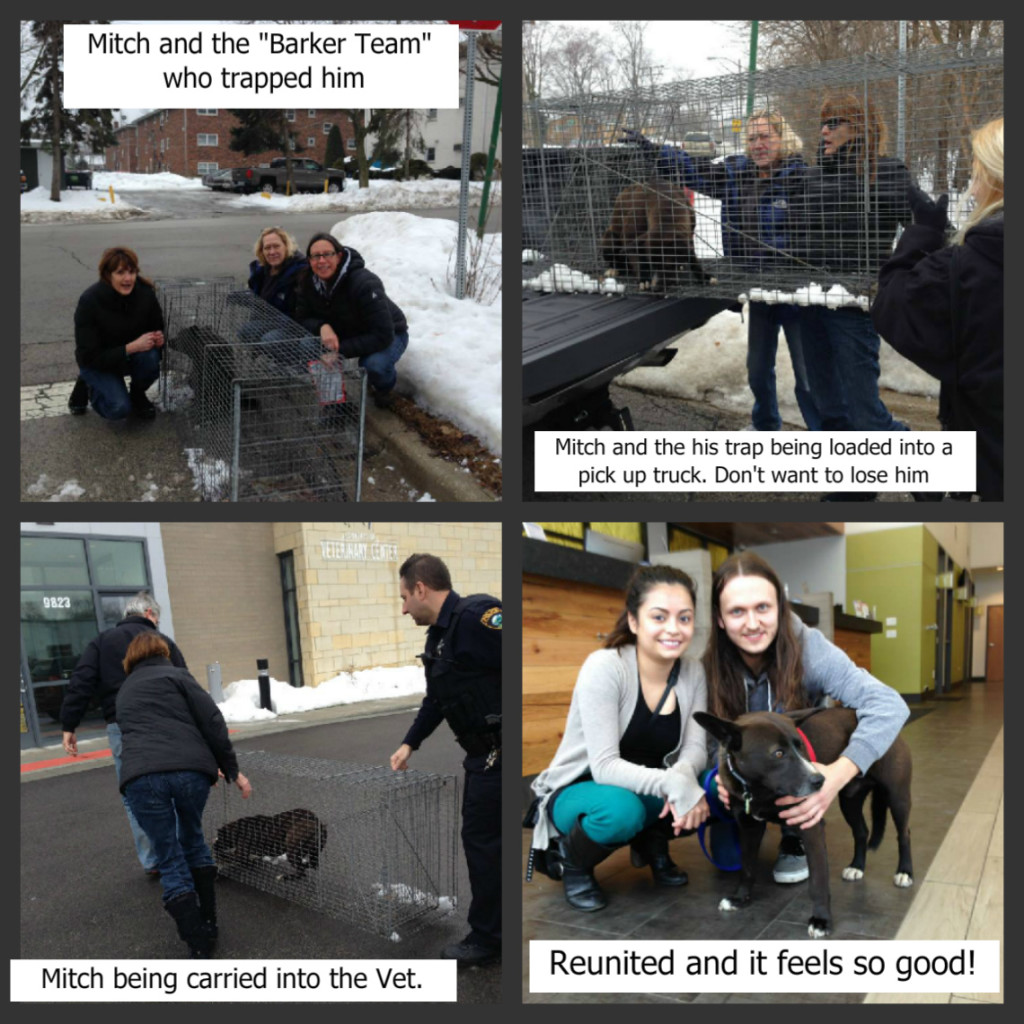 On May 31, 2013, Dawn and Roger from Michigan received a phone call saying Hoss,  who just had been adopted out,  had gone missing and had been missing for a week. Immediately Dawn submitted a Lost Dogs Illinois lost dog report. Days, weeks and months passed but they never gave up hope. 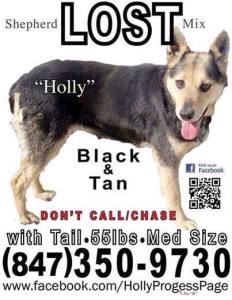 the German Shepherd from Wilmette, who went missing in July 2013), which received a sighting of a German Shepherd fitting Holly’s description. They sprung into action; flyered the area and got more sightings. They then set up a trail camera in the area where she has been known to frequent.   The camera did show a German shepherd but it was not Holly.

Lea, one of the volunteers, decided to check the Lost Dogs Illinois dog database to see if there were any GSDs fitting the dog on the camera. She found Hoss and posted the picture to the group. Also Hoss had gone missing only 5.5 miles where he was now found. They were pretty sure it was Hoss so they contacted Dawn and Roger who confirmed this was their dog.

Trail camera picture that was used to identify Hoss. 10/24/14

Roger and Dawn then came down the next weekend and camped out with their other dog. Hoss would not approach but the trail camera would catch him after they left. Disappointed Roger and Dawn left for Michigan. The North Shore Posse group continued to keep the feeding station going and distributed the following letter to explain what was needed to be done by the neighborhood. 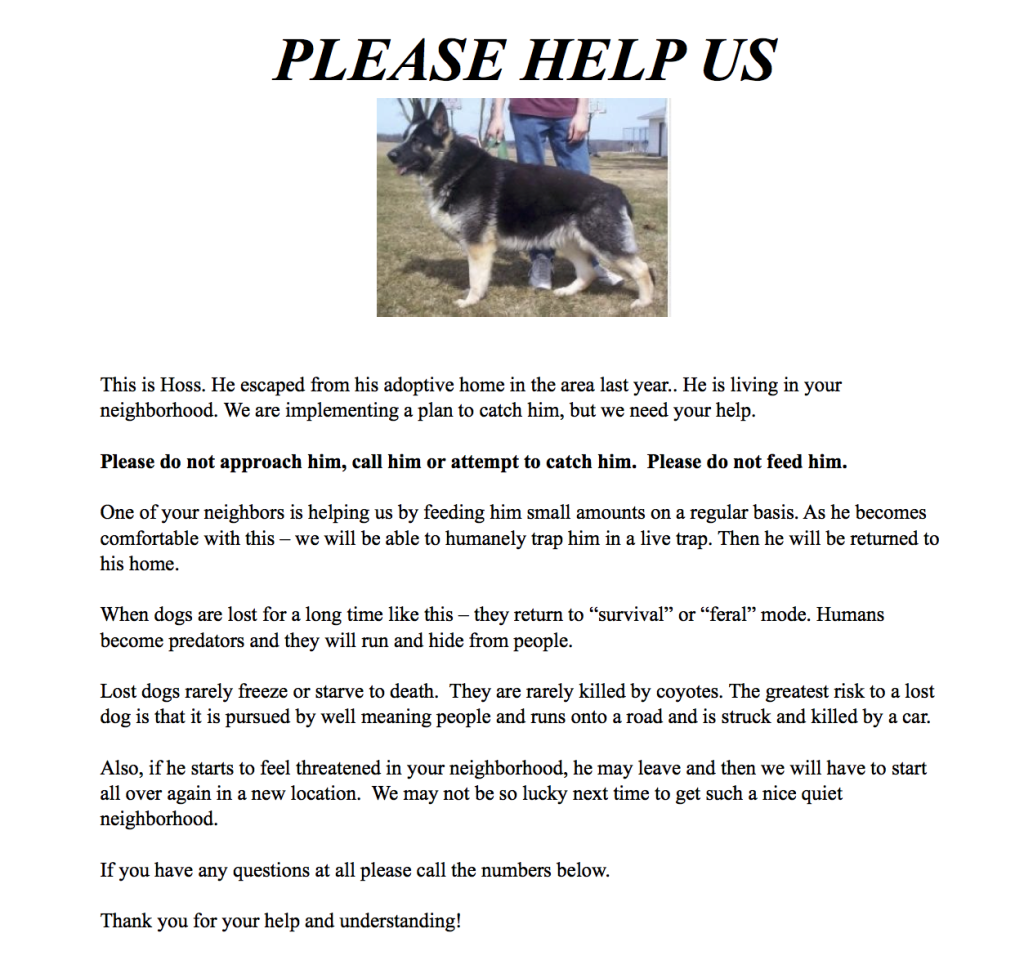 Cakes and Katie said they would continue to monitor the feeding station and set up the humane trap. They bungeed cord both doors up so Hoss could just walk through the trap to get use to it. Then proceeded to put one door down and leave one door bungeed cord up. 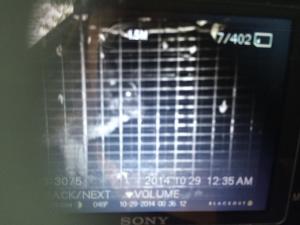 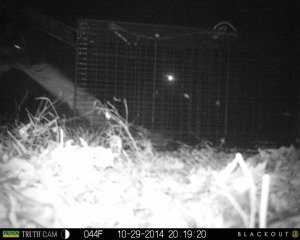 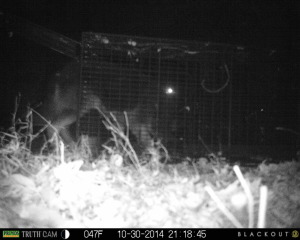 Within a couple days going back to Michigan, Roger came back down to watch the trap. During those nights, Roger witnessed Hoss dragging the blanket out of trap. He was stealing food from the trap. He was just not ready to be trapped.

During this time, Roger was improvising his own trap. Watching the you tube video of Misty’s trap, he put together his own trap for Hoss.   So that night, the humane trap was set and so was Roger’s trap. Early the next morning, Hoss was trapped in Roger’s trap. Roger called Cakes and Katie to have them help him remove Hoss from the trap.

Hoss had only lost 10 lbs thanks to a neighborhood where individuals were throwing out food to him which in turn became his own safe turf. 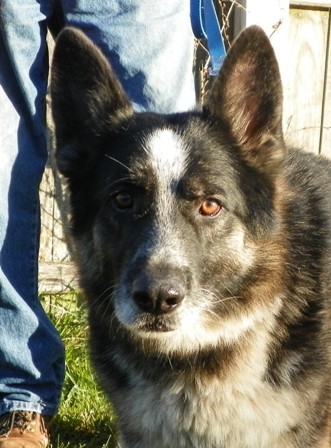 So what are the lessons learned:

– Dogs are survivors! Hoss had been living in this neighborhood even during the polar vortex. He was mostly a nocturnal dog so most people thought he was a coydog. Hoss’s feeding station and trap was setup at a spot he frequented because he would eat the bread a woman threw out for the raccoons.

– Remember not all lost dogs are homeless! If you see a “lost” dog, be sure to check LDI’s website and search their dog database, call your local animal control or shelter to see if anyone has filed a lost dog report.

– Once this dog was sighted, a plan was made and it was followed. Hoss has established his turf and the team worked with him. They didn’t push him; they just let him be. Simply fed him the same time in the same place every single day.

– AND Never Give Up!

Roger wants to thank the neighborhood where Hoss had settled in. The neighborhood rallied around Hoss and Roger. They fed Roger knowing he was monitoring the trap at night. They also let him borrow their tools to build Hoss’s second trap.

Thank you to the North Shore Posse team for not giving up on Holly and making this a team effort to capture Hoss. Thank you, Katie, for leading the team!

Lindsay, a shy beagle was successfully captured by the well-coordinated team of volunteers at Midwest BREW.

In this final segment of our series for shelters and rescues, we will focus on some of the common mistakes that can lead to a prolonged search or unfortunately even the death of the missing dog.  Most of these mistakes can be attributed to a lack of leadership or the absence of a strong point person on the case. We covered this in detail in Part 3 of the series. Without strong leadership, the volunteer base will become frustrated and frayed. Some may become disinterested, some may give up, and some may go off on their own, using methods that we would never recommend.  These include:

We hope this series has given you some guidance and ideas if one of your rescue or shelter’s foster or adopted dogs go missing. Searching for a shy lost dog is expensive and time-consuming. Pre-planning, volunteer training and avoiding common pitfalls will save you the time, money and resources that could be better spent on saving more lives.