On March 31, 2012 Finn, a two-year-old Brittany, escaped from a vehicle in a parking lot in Joliet while being transported to a foster home in Canada by the group National Brittany Rescue and Adoption Network (NBRAN). Finn quickly became somewhat of a celebrity as hundreds of volunteers across several counties in Illinois followed his story and eventually assisted in his rescue. After two-and-a half months on on the loose, they captured him in a trap set at the home of a woman in Romeoville who had been feeding him. 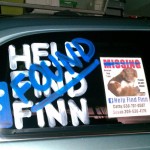 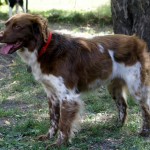 NBRAN Coordinators Cathy and Susan, both of whom have been fostering for about 11 years, created a Facebook book page dedicated to his rescue and heavily utilized Lost Dogs Illinois’ tips and networks to eventually bring him to safety. They had a stealth plan of setting up cameras and relying on sightings across several towns. Volunteers were told not to call or chase him and instead call them with tips and photos. They set up video cameras which helped them track his feeding and traveling patterns.

I caught up with Susan Hennis to talk about her journey finding Finn.

Was it hard to resist the urge to call for him or chase him?

It was extremely difficult not to call and chase Finn — in fact, we did at the beginning. We were calling him all the time and trying to find him. It was at the advice of Lost Dogs that we stopped trying to call him as well as encouraging others to not call him and chase him.

How did it feel when you saw videos and photos of him while he was lost?

It was so amazing to see photos and video of Finn while he was lost. The first actual photograph was from a Forest Preserve Officer in the middle of May- we had sent them a flyer probably a month or more before that time and he had kept it. He called me right after he saw Finn and had taken a few photos with his phone.  It was reassuring to see that 1) it was him and 2) he looked okay. Anytime you rely on sightings you have to hope that the people are truly seeing the dog you are looking for. The video was shot shortly before he was caught and it was also so appreciated…it was crazy to see him looking so confident and on his mission. And to see that he moved like we remembered and it was really Finn that was in that area.

How does it feel knowing so many community members, most of them strangers, I assume, helped in the rescue?

It was very touching and also crazy that so many community members- in multiple communities- got involved with “Help Find Finn.” It started from the very beginning…Finn got loose on a Saturday and a woman (who heard about Finn through a few other people) emailed me to ask if it was okay if she went to look for Finn. Finn got loose in Joliet- I live in Normal and the other coordinator lives in Earlville. I was so completely thankful that a stranger who did not know Finn, me or NBRAN was willing to spend time looking for Finn. That woman looked for him four times that week…she hung flyers, searched and left dog food. As we went from community to community we met so many more wonderful people who offered to help. People hung signs, told their neighbors, called newspapers, arranged radio interviews, actively searched, ran out at the drop of a hat when we got a sighting. I was continually amazed that we were so blessed to have so many people interested in Finn’s story and willing to help.

How quickly did you get over 400 likes on the “Help Find Finn” Facebook page?

We got likes on our FaceBook page a number of ways…initially it was really word of mouth. As more signs and flyers were hung and newspaper articles were written people became really interested in Finn’s story. He spent a considerable amount of time in Channahon and Minooka and then a long time in Romeoville and I think we really gained a lot of likes during that time…but there were also others that were “Finn Fans” that lived a distance away.

What kind of support did you get from Lost Dogs IL fans on our page? How did having Lost Dogs IL as a resource help you feel supported?

We received a lot of wonderful support from Lost Dogs of IL.  As I  mentioned, we really knew very little about finding and catching a lost dog…in addition, Finn was a different story since he was a rescue dog lost on a transport — he didn’t know where “home” was.  LDI gave us a lot of welcome advice from the very beginning. They provided advice on how to get the word out, how to post signs, how to use a live trap, how to get a dog used to an area…LDI also kept us hopeful when we were down by being extremely supportive. It was hard when we wouldn’t get sightings for a while and LDI would give us stories of other dogs found after a long time. LDI also really stressed that most dogs won’t starve to death, die in a storm or get attacked by an animal…most dogs get hurt when pursued (running into traffic etc.).  I don’t think we would have gotten Finn back without the advice of LDI.

Have you thought of any steps to prevent a dog from running away that you can share with other dog owners?

Cathy and I have both talked about making sure all dogs on a transport have two very snug collars that are linked to separate leashes. We have also obtained large tags with phone numbers and “rescue dogs” on them. If we learned anything from this is that ANY dog could run — Finn was not a runner and was a “model” foster dog. After being found he quickly adapted to being in the home and is as adjusted as any dog. What I would share is never assume your dog won’t run. Treat all of your dogs as potential flight risks and take all opportunities to keep them safe. Aside from teaching them commands, make sure anyone in your home is aware of the dogs and not opening doors around them or giving them the opportunity to escape.