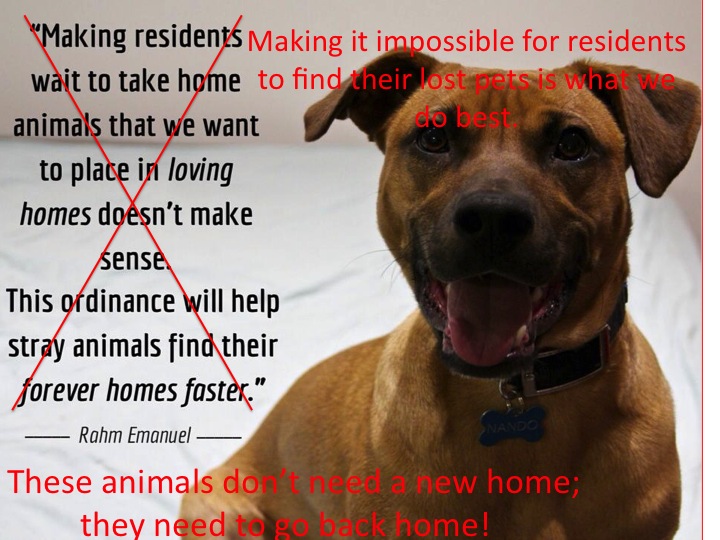 We, at Lost Dogs Illinois, feel it is important to keep you informed on what is going with trying to revisit the ordinance to reduce the stray hold of dogs and cats in Chicago.

Last Thursday our Director attended the open meeting of the Commission (advisory board)  for the City of Chicago Animal Care and Control. She read the following statement:

“Good Morning!  I am Susan Taney, Director of Lost Dogs Illinois.  As many of you know, LDI is a not for profit organization that provides resources and tools to help families find their lost dogs.  We saw the need to help Illinois residents in the recovery of their lost dogs. Many people give up, do not have the resources to help them, do not know where their animal control facility is located or the money to pay for a professional “pet detective”.  In less than five years, over 15,000 dogs have been reunited with their families.

We were very dismayed to learn after the fact that the City of Chicago Budget committee had passed the ordinance to reduce the stray hold.  On LDI’s Facebook page, we asked our supporters to contact the Mayor and Aldermen.  I attended the City Council meeting with our supporters to only find out that there was no public discussion allowed at the meeting.  Another aldermen also had told us that the ordinance was going to be tabled for more discussion.  The ordinance was passed with no public comment.

After trying to find out when the ordinance was going to be implemented.  I FOIA’d (Freedom of Information Act) City of Chicago Animal Care and Control and received the following message – “See Attached and the link to the ordinance” Then I asked the City Clerk’s office – they gave me the link.  Again, no implementation date was set.  I did not find out the implementation date until the Prince Charming blog. There was nothing provided to the hundreds of thousands of Chicago residents with beloved family pet members letting them know that the ordinance had been changed.  Chicago citizens pay taxes; their taxes fund CACC. CACC is supposed to provide services to the citizens.

I also want to share that two years ago Kathy Pobloskie, Director of LDOW, and I met with the CACC senior management staff to provide suggestions for free and low cost ways to increase the return to owner rates.  We offered to train their volunteers.  I also presented a PowerPoint presentation to CASA about Lost Dogs Illinois in regards to our program.  Our goal is to make Chicago shine and be one of the best cities to live in and know that the Chicago residents who have animals as loved family pets will be treated with respect and dignity. We have received so many testimonials from families saying they did not know what to do, where to look and now CACC has only made it more difficult for residents to find their lost animals. There needs to be a balance between people who have lost their dogs and the truly homeless dogs that needs to be rescued.
To conclude, we are very disappointed that there was no public discussion allowed when this ordinance was passed.  There has not been any kind of public information campaign.  This ordinance is vague.  There are so many unanswered questions.   I have attached my blog in regards to questions about this ordinance.  I request that all these questions be answered in a public forum.  Thank you for allowing me to speak.”

Attached are the handouts that was given in the packet to the members of the Commission for the City of Chicago Animal Care and Control .

LDI Blog – Revisit the ordinance to reduce the stray hold period for cats and dogs in Chicago.

LDI believes that knowledge is power. Be sure to read our blogs. Be informed.  You are your animals’ advocate.  They are depending on you!  The Mayor and Aldermen have the power to change this ordinance. We ask that you continue to call, email, and even set up appointments to discuss your concerns. Continue to share the petition.

Together we can make an impact for Chicagoans and their loved cat and dog family members. 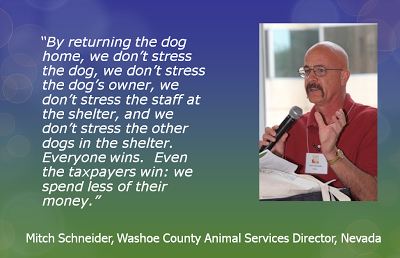