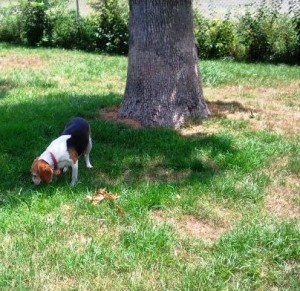 Rollie, your  friendly dog is missing. He was in the fenced backyard sniffing around and enjoying himself while you just stepped inside for a minute to get a cup of coffee. The phone rang and you were longer than you meant to be. When you came back out he was nowhere to be seen. Then you saw it, the side gate was open. It must have blown open in the wind last night! Rollie must have used the opportunity to check out the neighborhood.

Rollie fits the profile of an opportunistic dog. You may never know what happened in those few minutes when Rollie escaped, but it doesn’t really matter. What matters most is what you do next. Quick action will help you recover Rollie safely and the following series of articles is designed to help you find a friendly dog that took an opportunity to go for an adventure.

First things first, you need to check out our 5 Things To Do If You Have Lost Your Dog and get those steps underway. Keep food, water, his bed and familiar scented articles at the spot where he went missing from for the entire duration of his adventure. Many of these dogs do return on their own. Especially if they aren’t being chased and driven out of the area.

Contact all of the correct authorities – police, shelters, animal control facilities and then get busy printing your flyers and signs.  You need to go door to door with your flyers as soon as possible. Somebody, somewhere, has seen something. You might talk to 99 people that haven’t seen anything. But you are looking for the one person that has seen something. Has somebody seen your dog in their yard or did they see a vehicle stop and pick your dog up?

Three things will generally happen to the opportunistic dog:

Okay, now that we know the possible outcomes, let’s go through them step by step to try to maximize your chances of finding Rollie.

Continue on to part 2

Our tips, ideas and articles are based on information gathered from over thousands of  successful lost dog recoveries. Any advice or suggestions made by Lost Dogs of Wisconsin/Lost Dogs Illinois is not paid-for professional advice and should be taken at owner’s discretion.