Scruffbug spent her first nine months living huddled with her two brothers in a small cage at a commercial breeding operation. When the Almost Home Foundation rescued them, the dogs were understandably very timid. Dogs bred in puppy mills and by “backyard breeders” are kept in cruel conditions, spending all of their lives confined in wire cages and having no human companionship, according to the Humane Society of the United States. Cathy Slaski, one of AHF’s volunteers took in the youngest of the three to foster because, as an experienced dog foster parent, Cathy noticed the little female needed extra attention and care. She gave her probably the cutest name ever: Scruffbug.

The next day, Cathy says Scruffbug was ecstatic to be living a normal life. She was getting along fabulously with her five new playmates, who were chasing each other around the yard. “The sun was shining and birds were singing. I set up a baby pool for them to splash in,” remembers Cathy. But then, “In the blink of an eye, 1,2,3,4,5- OMG the 6th dog is missing! Tiny little Scruffbug somehow managed to escape,” she says.

Cathy quickly rounded up a search team of golfers and employees of the course next to her house. They drove around in their carts (even the beer cart driver) looking for the shy dog. Certainly, it was a tough task. Just one day after being rescued from a life spent in a tiny cage, Scruffbug had to be terrified, so she was highly unlikely to answer to their calls. Cathy called the police, posted Scruffbug on Lost Dogs Illinois and used tips on our Lost Dog Search Action Plan. Her fellow AHF volunteers helped her post almost 50 flyers in the area. 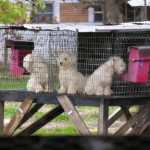 Puppies in a commercial breeding operation* 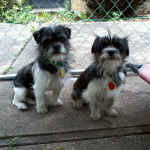 Scruffbug (right) and her brother, Brill


Cathy received calls throughout the day from people who had spotted the dog near the golf course but weren’t able to get close enough to catch her. As the sun was about to set, she started to get really worried. The volunteer team brainstormed and what they came up with was nothing short of inspiring: Scruffbug’s brothers were called to assist in the rescue.

They put the brothers in two separate crates and set up one in the front of the house and one in the back. Everyone gathered around the windows from inside the house, hoping the scent and calls of her brothers would do the trick. Cathy remembers, “It was just beginning to get dark so I went to put on the backyard spotlight. It had to be under 5 minutes when I spotted her through my bedroom window- sitting right by the crate in the backyard!” The rescue team, everyone with tears in their eyes, watched out the living room window as Cathy slowly coaxed Scruffbug close enough to get a hold of her. “After 8 hours of searching, we lured her back with her sibling bond,” says Cathy.

Using other dogs to lure a lost dog is often a successful tactic. Because her brothers were the only familiar thing in her life, using them was an especially smart plan in this case.