This amazing reunion story is being shared for a couple of reasons: 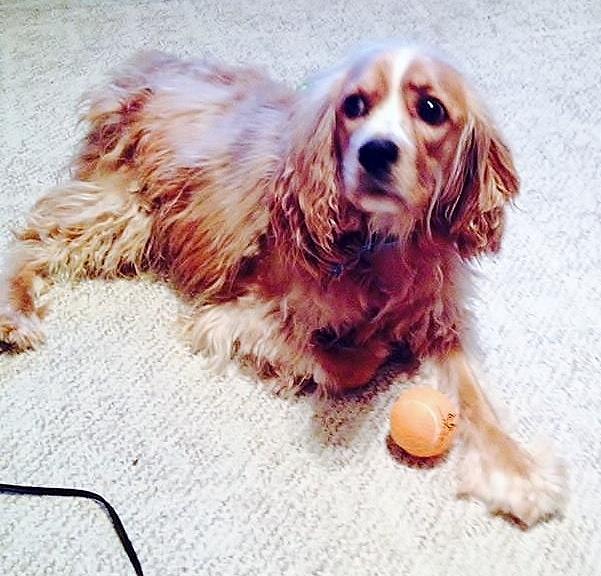 The story about Riley is no exception! It is an amazing story with many facets to it. This shy cocker spaniel got lost from his Mom while visiting friends in Palatine. Somehow he was brought into CACC in Chicago! Riley’s Mom contacted all the local PD’s and shelters from near where he got lost but she never thought to go as far as CACC in her search!!! Riley was lucky enough to have a microchip, however when he and his Mom moved from Pennsylvania she didn’t understand how it worked and she did not update her contact info which was unlucky for Riley. Consequently, CACC, animal control sent a letter to the only address on file, which was no longer valid, an old address in Pennsylvania. Riley was on a 7 day ‘letter hold’ at CACC awaiting a response from his Mom who did not receive the letter that was sent to the wrong address. Meanwhile, a fellow rescuer, Jacyln, noted this handsome dog who clearly had a home and took some photos and shared them with the rescue community. She also noted he looked like another lost dog out of Ohio belonging to, Laura . While she and I worked on that angle we hit a brick wall when the microchips did not match. The letter hold was nearing its end. Riley would be city property on 1/16/16, only available to rescues or perhaps the euthanasia room Another rescuer, Juliette was desperately seeking refuge for Riley and also convinced he was missing his family. Inspired by Juliette, I decided to do a little research on the chip and within an hour I had found Riley’s Mom. The wonders of Google and Facebook messaging had Riley’s Mom, Diane, in contact me within minutes. This was her dog, no doubt! Diane would be at CACC at noon armed with her paperwork and proof this was her Riley. However, another rescue trumped my hold request and they were going to pull him and place him in their rescue! Thankfully, both Juliette and I frantically contacted CACC via emails/phone calls and told them the story. CACC contacted the rescue, Furever Rescue, who graciously backed away and let the owner take her dog home. ( In addition to this, Furever has kindly offered to send a groomer to RIley’s home to care of those mats!)

Diane was the first person in the door at CACC today ready to take her guy home! Riley has kennel cough and was stinky and matted from his ordeal but he has gotten a bath settled in and is done with any more adventures to Chicago says his Mom, Diane. Riley proves that lost dogs can find their way home in spite of the hurdles. Riley’s story tells us lost dogs can be anywhere not just near the place they got lost from and we must look everywhere. Riley reminds me that every rescue must fully explain the importance of the microchip to their adopters as well as to keep them up date and to call them when their dog goes missing Riley’s story is also about the power of networking and sharing lost dogs on Facebook and all of us working together. You never know who will see your post that end of saving a life. Please don’t just “like” a post, please “share” it ! To everyone whose life he touched we are all the richer for it! Riley’s story involved a village to get him back home. Thanks to everyone who brought him home!!!.