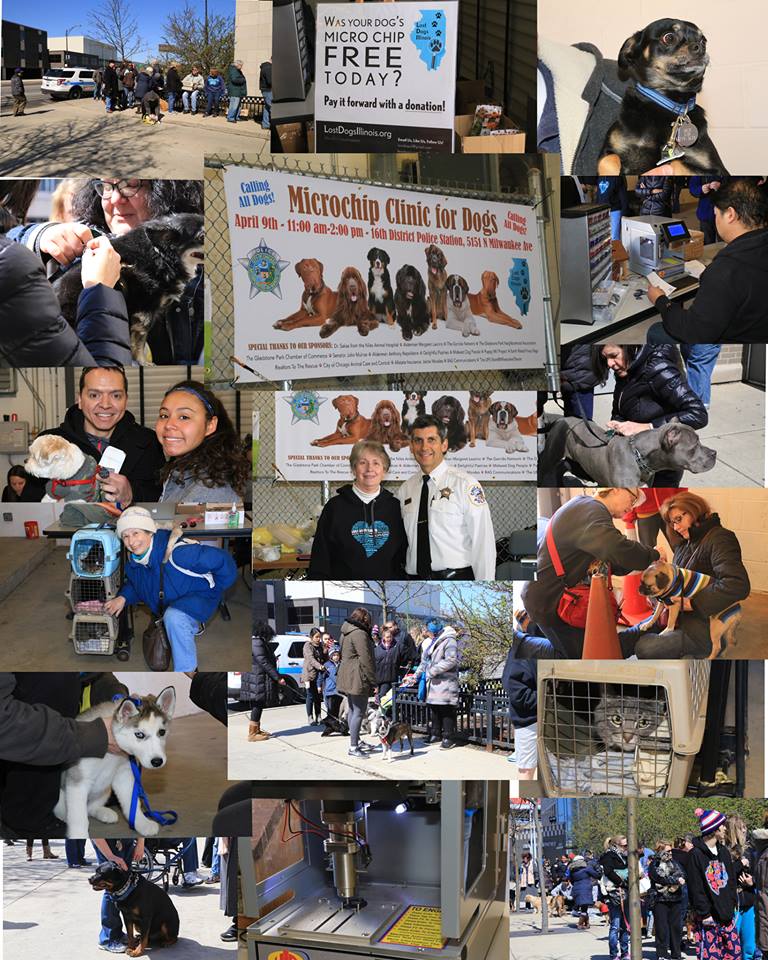 Dog and cat owners from across Chicagoland took advantage of the free microchip/ID tag clinic offered by Lost Dogs Illinois and the Chicago Police Department on Chicago’s Northwest Side April 9, 2016.

The three-hour clinic, held at the city’s 16th Police District headquarters in the Jefferson Park neighborhood, resulted in 121 dogs and cats getting chipped and receiving ID tags engraved with the pet’s name and owner’s phone number.

“This is like buying an insurance policy to keep your pet safe,” said Kathy Foley, who brought her rescued Rottweiler, Storm.

“My brother’s dog got out last spring,” Wiersma said. “He found it in the next day or so, but that fear – we didn’t want to go through that if ours ever got loose, so that’s why we’re here today.”

“William” brought his Pug/Cocker Spaniel mix, Lucy, with him. He said his friend, a Chicago police officer, called him that morning to let him know what was happening.

“I’m glad she did,” William said. “My family would be devastated if Lucy ever got out and we had no way to track her to get her back.”

Lori and Courtney Jensen drove into the city from north suburban Deerfield with their Chihuahuas, Tigger and Missy. They learned about the clinic on the LDI Facebook page.

“They [Tigger and Missy] try to run away a lot,” Courtney confessed.

“We were at a friend’s house when the UPS guy arrived there,” Lori said. “Tigger went running when our friend opened the front door.”

The Pacheco family – Luis, Sonnet and children – from nearby Portage Park came with their 9-month-old pittie, Samson, and 150-lb. Great Dane, Sasha.

“We saw a flyer at the neighborhood library,” Sonnet said. “We wanted to do this because Samson is a puppy, and puppies like to run. We wanted to make sure he would come back home if he got out.”

Shari Grassmuck, a Chicago Fire Department paramedic who lives near Midway Airport, brought her rescue Dutch Shepherd, Marmaduke. Grassmuck found him “playing with a rock in a mud puddle” one night while on duty on the South Side.

“I think a free microchip event is a wonderful idea,” she said. “A lot of dogs and cats are brought to the fire stations. So many animals get lost, and people either don’t know they can chip them or can’t afford to. “

“If it’s free, they will come,” said 38th Ward Alderman Ald. Nick Sposato. “As elected officials, we can tap our social media networks to get word out about events like this. It makes it easier for people to do right by their pets – there’s no appointment time, there’s no cost to them.”

Sharon Rolek drove an hour from the far Southeast Side neighborhood of Hegewisch to get three cats chipped and ID’d.

“We don’t have anything like this on the South Side,” said Rolek, who learned about the clinic in an email from Tree House Humane Society. “I hope this event inspires someone to do this out my way.”

Rolek may get her wish soon. Police Lt. John Garrido, one of the linchpins of the April 9 event, said that two other city police districts – the 5th on the South Side and the 25th on the Far North Side – have contacted him about holding microchip clinics.

“If there is a need for this kind of service in this area – and there obviously is – then there is a need in every area of the city,” Garrido said. “Sometimes it’s just an issue of cost, and that can be helped through sponsorship of events like this.”

Garrido explained that as the afternoon watch commander for the 16th District, “I see so many dogs that get out and are brought to our station. I just can’t see them getting put down because we can’t find their owners.

“We have a large social media network in this area and post and share pictures of all the dogs brought to the station,” Garrido added. “We figure we get about 60 percent of them back to their owners.”

Lost Dogs Illinois provided the ID tags and engraving machine, which it was able to purchase through a generous donation from Chicago-based Realtors to the Rescue along with other donations. 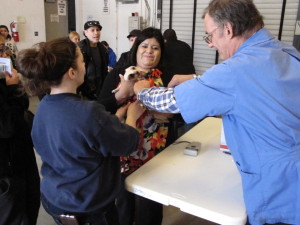 “We were very pleased with today’s turnout,” CACC Administrative Services Officer Sue Cappello said. “The 16th District did a great job of setting the event up for us, and we look forward to working with them again.”

To view more pictures of the clinic, click here