The one thing Lost dogs Illinois has proven time after time on our page is pictures work in getting lost dogs home! Pictures are the universal language.

Point in case…… A match was made this week on the unofficial Animal Welfare League (AWL) – Found/Stray Dogs Facebook Page, which is run by a group of volunteers who absolutely understand the importance of posting found dog pictures. When a volunteer is able to get to AWL, she tries to post pictures of “found” animals to the page.

The match was Pepe, a 19 year old Chihuahua, who was posted as lost on Lost Dogs Illinois Facebook page on July 28th. 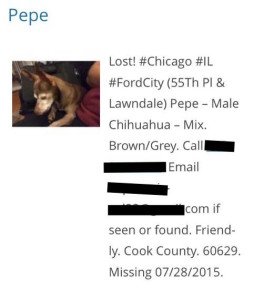 Pepe’s found dog picture was posted on AWL’s unofficial page on August 3rd even though Pepe was brought to Animal Welfare League on July 30th. 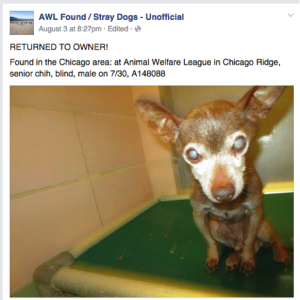 Luckily one of LDI’s fans recognized Pepe and emailed his owner right away. A very Happy Reunited was made! 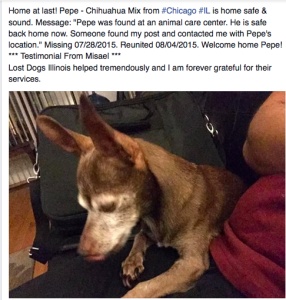 So what do we learn from this?   If there was an official Facebook page or if AWL would use the Pet Harbor software to post found dog photos (like they use for their adoption photos), Pepe would have probably been home by August 1st.  This would have meant less stress for Pepe, Pepe’s family, other dogs in the shelter, volunteers and staff.   It would have also been less of financial strain for Pepe’s family and the shelter.

We hope successful reunions like Pepe will convince Animal Welfare League to post pictures on Pet Harbor or their own official Facebook page. Technology has made it so simple – a cell phone can be used to upload photos directly to Facebook. Don’t our Illinois dogs deserve the very best chance to get back home to their families?