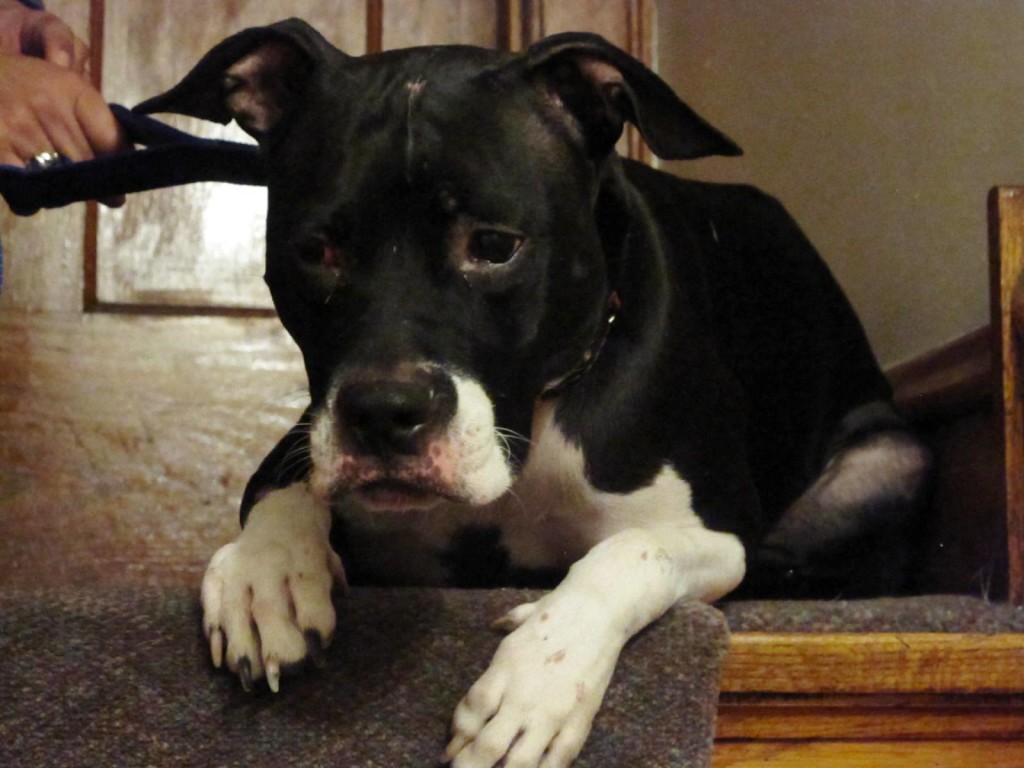 Long-time Chicago residents are familiar with “The Chicago Way”:  it’s often not what you know, but who you know, that gets things done in this city.

So when Andy Csapo opened the tool shed in back of his family’s funeral home on Chicago’s Northwest on Nov. 20 and saw two eyes glowing in the back of the shed, the first thing he did was tell his wife, Joyce.

“The shed is just an enclosed outdoor stairwell, and the door has a missing slat on the bottom, so it must have crawled through that,” Andy said.

“I could make out a large animal with a dark coat trying to hide under the lowest stair. I knew it was some kind of dog; too big to be a coyote or raccoon.” 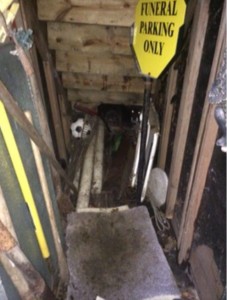 Can you find Kyra? 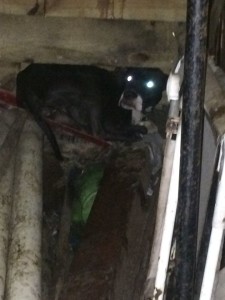 The Csapos did not want to call Chicago’s Animal Control for help, because they didn’t want the dog taken to the city pound. Joyce called her daughter, Joy, and asked Joy to call a friend who does animal rescue transports for help.

The transporter, Lydia Rypcinski had never done an actual rescue. However, she knew Susan Taney, founder of Lost Dogs Illinois, and called Susan for advice.

Susan referred Lydia to Katie Campbell, an experienced dog rescuer who lives on Chicago’s South Side.

Katie suggested that Andy cover the opening in the door, provide the dog with blankets, food and water, and make sure it was secure until she could get to the funeral home the next day. With Chicago’s biggest November snowstorm in 127 years approaching that night, Katie’s concern was that the dog stay in one place, protected from the elements.

The next afternoon, Katie arrived with hot dogs and her “snappy snare” and was able to secure and bring the dog out of the shed. The dog had a collar and nametag – “Kyra” – with a phone number on the back.

Kyra, a handsome 3-year-old black-and-white pit bull, was bundled into blankets and lifted into Lydia’s car while Katie called the number on the tag.

“It’s their dog!” she shouted as she got off the phone. Kyra’s family had posted the dog’s picture on Lost Dogs Illinois eight days earlier, after Kyra escaped from the back yard of their house two miles north of Meiszner Funeral Home. Katie was able reference the posting to verify that the dog was indeed theirs.

“The kids were jumping up and down and their other dog knocked [Kyra] right over when I brought her inside,” Katie said. “You could see her family really loves her.”

“I thought I would never see her again,” Sandra Ortiz said. “My family and friends told me to file a missing dog report on Lost Dogs Illinois. Several people called who thought they had found my dog but hadn’t, and I was starting to lose hope. I have three kids. My youngest was asking if Kyra was not going to live with us anymore. I didn’t know what to say.

“When Katie called, we were in tears.” 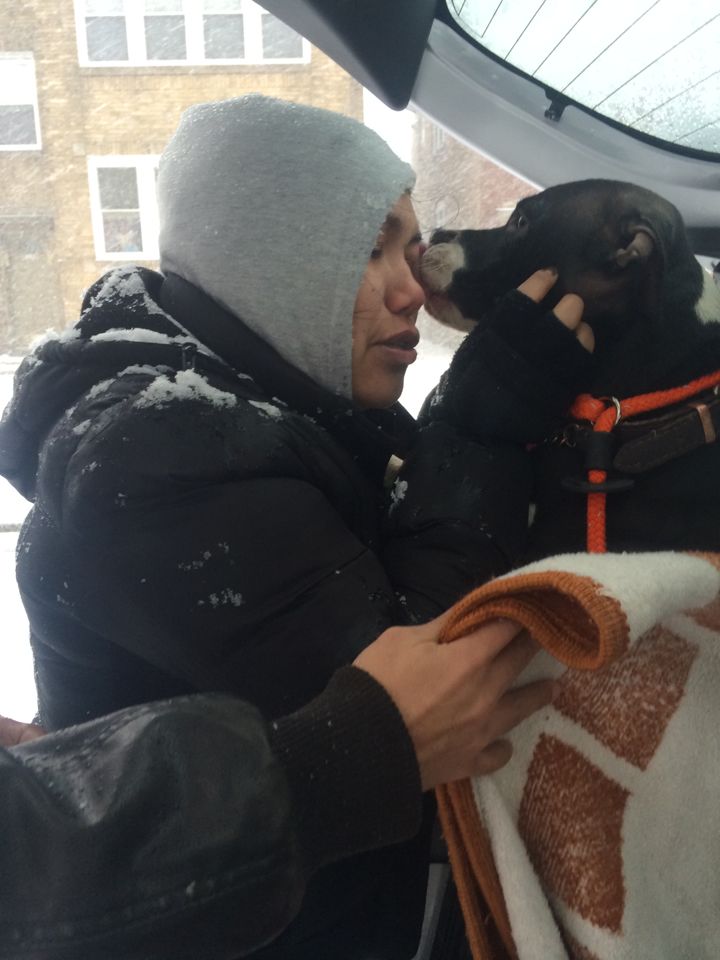 A trip to the vet revealed that Kyra had dropped from 57 to 33 pounds, that her sugar levels were high, and that she had cold burn rashes on her paws but otherwise was in good health. She was microchipped right away, and the faulty latch on the back gate was fixed to pre-empt future escapes.

A week later, Kyra had regained much of the weight and was happily romping with the Ortiz children and their other dog, a Shih Tzu named Bear.

“Bear was really excited to see her again, he had been getting depressed without her,” Sandra said.

“We’re so grateful to have her back,” Sandra added. “Thanks to everyone who helped bring Kyra home.”

The Chicago Way and Lost Dogs Illinois.  That’s a winning ticket in The City That Works. 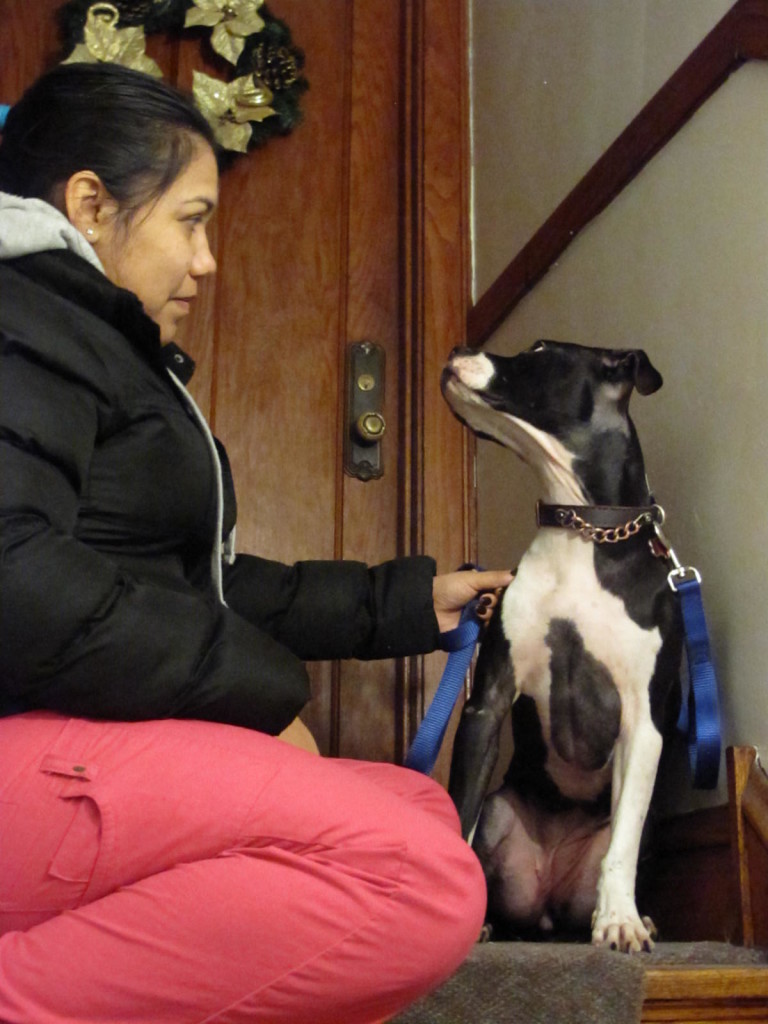 Kyra and Sandra – one week later!