It was a typical summer day. All seemed normal in the family’s world – except their boy, Freddy,  wasn’t with them. The family was on a once-in-a-lifetime vacation, and Freddy was staying at a reliable boarding facility. It was one the family felt comfortable leaving their best friend at – 16 years in business, and never a flaw or escape.

The call a pet parent never wants to get – the one that shatters your world and turns it upside down – came that afternoon. Freddy had escaped from the facility and was on the run. No collar and no tags (as a safety precaution and to prevent injuries, boarding facilities do not leave collars/tags on), but one redeeming feature: Freddy was microchipped and his contact information was up-to-date.

Over 4,100 miles away with fear and panic setting in, Freddy’s family contacted a friend whose sister lives and breathes Lost Dogs Illinois. The friend called her sister and set into motion events that gave the family a glimmer of hope.

Lost Dogs Illinois has a “5 Things to Do When You Lose a Dog” action plan that the friend and sister deployed immediately. Step 4 of the plan tells pet owners to ask people not to call out to or chase a dog they see if they think it is lost. Instead, ask them to sit or lie down, with no eye contact, and toss out a few pieces of tasty treat to lure the dog to them. 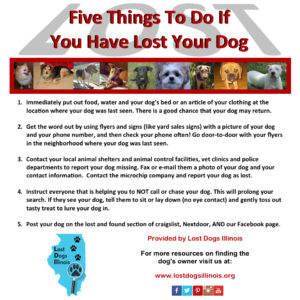 Sure enough, a call came in with a sighting of Freddy. A little food, a little water, and scent items like clothing were taken to the sighting location immediately to lure Freddy in. Now it became a waiting game; someone had to sit a distance away from the location, wait, make no sudden movements and, above all, be patient.

The patience paid off hours later, when one of the boarding facility’s employees spotted Freddy near the site. The mission then shifted from finding Freddy to encouraging him to come to the employee. Freddy’s family’s friend then came up with a genius masterstroke – why not let Freddy’s mom call out to him via Facetime?

It worked! Freddy heard his owner’s familiar voice calling softly to him from 4,100 miles away over the phone, and Freddy followed the voice right into the employee’s arms. Freddy was SAFE! 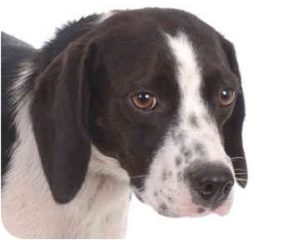 As a longtime follower of Lost Dogs Illinois, I have learned you can never tell people enough about what this organization does to help recover lost dogs. Spreading the word about Lost Dogs Illinois is the MOST important message you can convey to pet owners – even owners who have never lost a dog – because you just NEVER, EVER know when you or a friend will need LDI’s help and resources.