Stella’s rescue is such an important story to tell.  Both the family and Buddha Dog Recovery and Rescue hope that her story can help other families know what to do and what not to do when their pet goes missing.

When Stella went missing on May 13th, a recovery group out of CT urged the family to hire a tracker out of Rhode Island. After paying $450, this tracker told them that Stella was cornered and picked up and taken by someone. Terrified and heart broken at thought of Stella being taken, her family posted signs that Stella was stolen. The truth was, Stella was never picked up, never stolen…she had never left the area as confirmed by countless sightings that started pouring in. The tracker could not have been more wrong. When confronted with the numerous sightings, both the tracker and recovery groups go to answer as always, was that whomever had Stella, let her go. Once again, this recovery group urged the owners to bring this same tracker back out to track Stella AGAIN and still sticking to same bogus story that she had been picked up. Stella was being sighted in a concentrated area, on the same streets over and over and over for a couple of weeks. Instead of setting up much needed traps for Stella, this recovery group had the family doing pointless bacon burns morning, noon and night for several days with the hopes that Stella would just come out of hiding and come out for the owner. Finally, after weeks of wasting precious time, resulting in Stella traveling further away, the recovery group set up a trap that was far too small for Stella. Not only was the trap too small but it was not set up properly and was left unmonitored, leaving a possum in the trap overnight and in to the next day which caused Stella to move from that area…again!

It was at this point that Jenn and I were contacted by the family. New signs were made and the poster coverage was expanded miles out from her last known whereabouts. After almost a week of no sightings, we finally got the call we were waiting for, someone who saw Stella’s poster on facebook, saw her six and half miles away from where she was last seen. More posters went up and we began mapping her extensive travel and figuring out her travel patterns, which included running along and crossing dangerous route 84. We immediately set up traps and an enclosure in the woods alongside route 84, monitored with a wireless feed so that the area would remain undisturbed. We repeatedly got Stella on camera along with a host of her furry friends, which included a very unwelcome fisher cat, a fox, possum and three different cats. The traps were monitored around the clock and many sleepless nights in the car ensued, so that if any of these creatures set off the trap it would be immediately reset so as not to scare Stella off from the area. Not disclosing many of her sightings and the location of the traps were instrumental in Stella’s capture. Stella’s daily travel pattern was a ten mile straight line back and forth appearing at the trap every two to three days. One terrifying night we helplessly watched from a distance as she slept directly along side route 84 by the enclosure, one false move and she would run directly in to traffic. Finally, last night she appeared on camera for what would be her last time, I called Jenn who lived minutes from where our enclosure was set up and she was there momentarily to hear the door slam shut…Stella’s time on the run was finally over! I made the call to Stella’s family and through screams of joy they made their way to meet Jenn and be reunited with their sweet Stella. All the sleepless nights, the poison ivy and poison oak was worth it!!! If proper recovery steps had been taken in the beginning, Stella would never have been in such danger on route 84 and would have been home long ago. By sharing the full story of Stella’s rescue we hope to help other families. 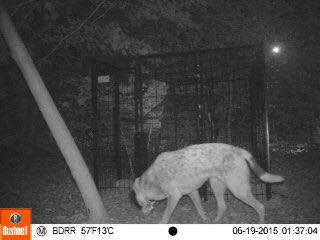 Thank you Buddha Dog Rescue and Recovery for giving us permission to print Stella’s Story.