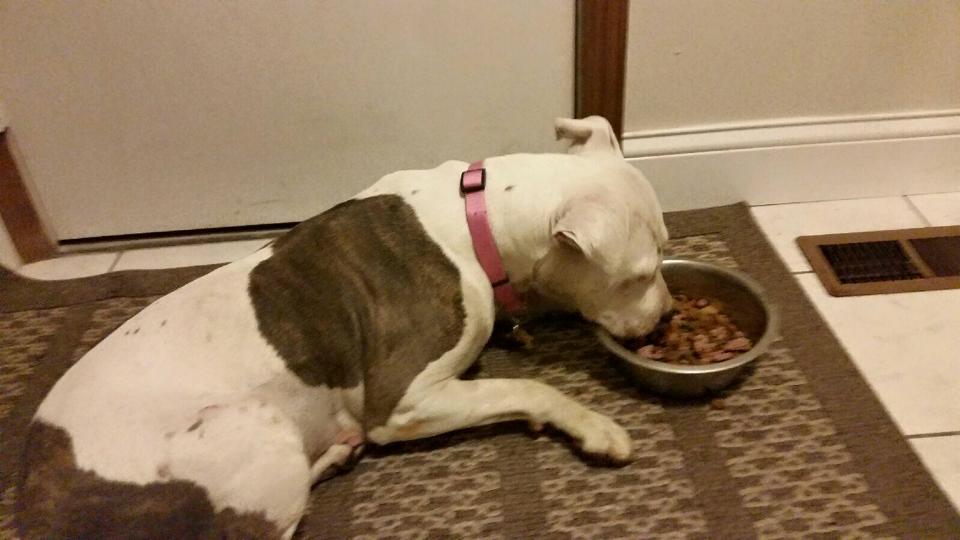 Reva enjoying her first dinner after being reunited.

‘Reva is safe! She was brought to her new home on Friday, September 4th. Since getting there, her owner has walked the same route with her daily.

Because Reva came from a feral/skittish lifestyle, she took the opportunity to bolt when a door was opened. Her harness broke in a freak accident and she took off. For the next 8 hours, she was spotted looping the subdivision her house is in and the golf course behind it. Reva knew what way Dan walked her only after 3 short days. Routine is essential with a new dog, especially a timid one. Smart cookie. 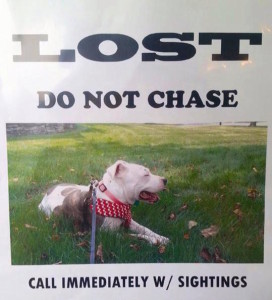 Dan and Denise quickly called the local police station as well as animal control. Flyers and posters went up, neighbors were asked not to chase her, but to call immediately with sightings. Reva came to the front and back of her new home 2 or 3 times. Her bed, fresh water and food were placed behind the house. We really believe not being chased kept her safe and in the area. As nightfall came, there weren’t any sightings of Reva for over 5 hours. A humane trap was set and baited behind the house next to her bed and Dan set watch. And then, an amazing phone call took place: Reva was in someone’s fenced in yard! The homeowners saw her, called Darien PD (which had Dan’s contact info and description of Reva) and Dan was able to pick her up from the house.

Accidents happen. Harnesses and leashes may break when you least expect it. We followed the advice our friends at LDI stress: do not chase and get the word out immediately. Because authorities were contacted, flyers stressing not to chase were posted and the neighbors didn’t disrupt Reva’s loop pattern, she is safe. Never underestimate the intelligence of a dog. Reva was able to retain her walking route only after a few short days, which is critical for a shy dog.

Thank you for the wonderful support, LDI!’