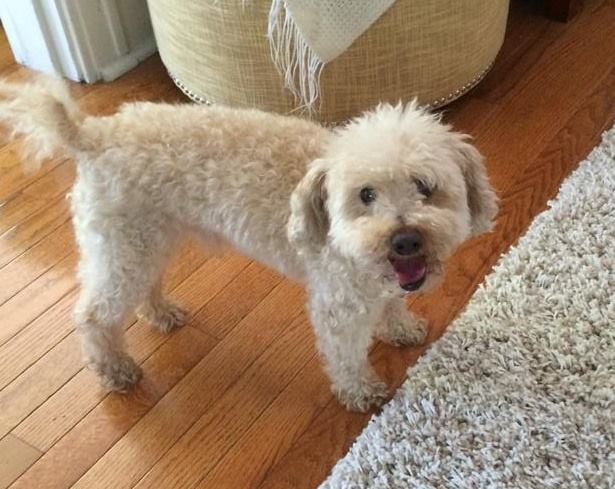 The Klima family of Downers Grove were out of their minds with worry when their 7 lb, 14 year old Toy Poodle went missing on July 8th, 2015.  Sock’s collar had been loose, and he had slipped out of it and escaped with no visible signs of ownership, and with all the scary things out there in this world – strangers, traffic, wildlife; plus cold and rainy weather, how would he ever make his way home to his family?

Information on Sock was posted in the Reporter newspaper,  and on CraigsList, and local veterinarians and shelters were notified; someone then notified the Klimas about Lost Dogs Illinois, so they registered him and printed the flyers generated, which they posted at local businesses.

As the weeks wore on, they assumed the worst, but never gave up hope that their little friend would someday come home to them.  Unbeknownst to them, a Good Samaritan named Tricia was driving home on July 9th and saw a fuzzy thing in the middle of St Charles Road in Glen Ellyn.  Another car had stopped  as well, but the dog came to her, so she scooped him up and started knocking on doors.  No one was home to ID the dog, so she filed a report with the local Police Dept. then brought the little guy to a Lombard veterinarian that she knew held found dogs.  Where had this sweet little old man come from?

After 10 days at the vet’s office; having been scanned for a chip (and then receiving one, as well as vaccinations, when none was found), and no one claiming him, Tricia brought him home, as she did not want this senior boy going to a shelter.  She named him ‘Waffles’, had him groomed and  bought him dishes, a collar & leash, and a bed and began making him part of her family, which  already included 2 dogs,  a cat and a couple of kids.

‘Waffles’ did well with Tricia’s family for several weeks – got along with the dogs, learned to use the doggy doors; snuggled with her during the day when he could, and slept next to her at night. She even went on vacation for a week and left ‘Waffles’ with a friend who bonded easily with him as well.  However, ‘Waffles’ did chase the cat, and did not respond well to the children, which worried her, and she kept trying to find his real home. Then a friend suggested she post him on Lost Dogs Illinois.

After completing the registration for the Helping Lost Pets/Lost Dogs Illinois site, Tricia began to look through the Missing Albums to see if she could find a dog that looked like ‘Waffles’.  Lo and behold!  there was a very similar dog – but he was lost in Downers Grove and she had found the dog in Glen Ellyn, about 7 miles away.  Was it possible this dog could have gotten so far in one day?  She immediately contacted the Klimas and then FaceTimed with them so they could make sure ‘Waffles’ was really their Sock!   They arranged a meeting and oh, the joy when Waffles/Sock saw his family – Tricia told us he went crazy and ran to his owners as fast as his little legs could carry him!  Everyone involved smiled the widest smiles they could; both owners and finder told us it was one of the happiest, most fulfilling moments in their lives.  After 6 weeks, Sock was finally home!

We will never know the full story of how Sock traveled such a distance from his home, but we tell this story not only to commend all the Good Samaritans out there who think not all homeless dogs are strays when they see a dog on the street, but to stress the importance of micro-chipping your pets, and keeping those chips updated with current contact information.  We also urge you to ask your vets to link up with Helping Lost Pets so that when lost dogs are brought in to their clinics, microchipped or not, this nationwide database of lost pets can be searched so Happy Endings like this can occur so much sooner.